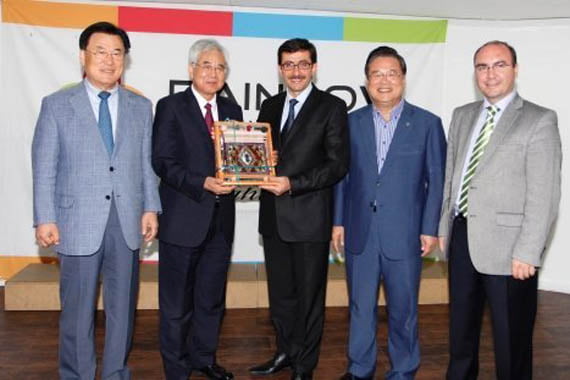 A delegation of South Korean superintendents of education and Rainbow International School operated by Turkish entrepreneurs jointly organized “South Korea-Turkey Educational Partnership Summit.” With the follow-up steps to be taken, the two countries are anticipated to get even closer.

“We are ready to do all we can in order these well-intentioned initiatives to be successful. Such meetings will remarkably help further the friendship between Turkey and South Korea,” the board chair Esref Saglam remarked.

Seoul’s Superintendent of Education, Moon Yong-rin, noted that Turkey is the number one in their list of countries to partner with. Yong-rin said they are eager to go into partnership primarily with Turkey and that they believe the economic partnerships between the two country need to be reinforced with educational ones.

Following the talks on Turkey-South Korea relations, the principal of Rainbow International School, Emin Huseynov briefed the attendees on the school’s education system. He noted that the entire instruction at the school is offered through iPad and MacBook use. Huseynov further said they equally attach significance to moral education too alongside technology. Impressed by Huseynov’s presentation, the Korean delegation members stated the number of such schools should increase. Specifically, Degu’s Superintendent Woo-Dong-gi expressed his appreciation of the school’s projects and pointed to its quality teachers’ contributions. Noting that he is impressed by the school’s multi-cultural aspect, Woo went on to say, “It is amazing that you have been able to gain accreditation in such a short period of time. You’ve achieved a great success!”

In his statements to Cihan News Agency, the superintendent Moon Yong-rin following the meeting said he had been to the school for three times and that he had witnessed each time yet another innovation. “The school has achieved a great many innovations in a very short period of time. It has a powerful educational philosophy.” Yong-rin noted.