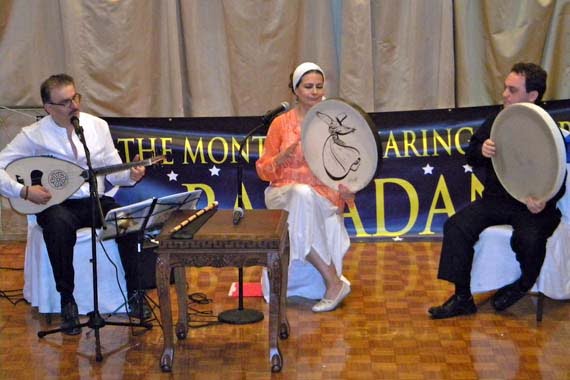 As part of the month-long celebration of Ramadan, the Turkish Cultural Center (TCC) of Queens hosted its annual interfaith Ramadan Iftar Dinner July 24 at the Woodhaven Manor.

Its purpose was to break bread after a long day of fasting. During Ramadan, which lasted this year from July 8 through Aug. 7, Muslims refrain from eating, drinking and sensual pleasures from sunrise to sunset as a form of spiritual cleansing.

Turkish Cultural Center (TCC) Queens is based in Sunnyside and is a non-profit organization dedicated to promote harmony in a diverse cultural setting in the U.S. The nation of Turkey is at a crossroads of the world between the continents of Europe, Asia and Africa and is similar to New York in that both house many different cultures

The theme of the evening was “Fasting in All Religions,” so TCC Queens hosted speakers from all religions to discuss their fasting methods.

Sayar said that fasting was willed by God, and that is reason enough to take the practice seriously. He said fasting allows Muslims to realize the value of all gifts from God, including the sun rising and setting each day.

“When they (Muslims) break fast, they try to invite other people, not just among themselves but people of other cultures,” said Monserrat Ocampo-Washburn, adjunct assistant professor in the department of theology and religious studies at St. John’s University, Jamaica. “They really show that they are in solidarity. There is a commonality of the fasting. They may think of it differently, but it seems that all the Abrahamic faiths all do have fasting from the very beginning.”

Ramadan occurs in the ninth month of the Islamic lunar calendar, meaning that the month-long fast falls 11 days earlier than the successive year. Muslims believe that during this month, God revealed the first verses of the Quran to the prophet Muhammed. Fasting is one of Islam’s foremost pillars in which Muslims learn discipline and self-restraint.

In addition to sharing the meal with representatives of different religions, TCC Queens opened its doors to its neighbors of the surrounding Queens communities, thus fulfilling the Muslim obligation of helping others during the month of Ramadan by sharing the wealth God has bestowed upon them.

“I admire their (Muslims’) devotion very much,” said Father Jonas Achacoso, a visiting summer priest at Queens of Angels parish, Sunnyside. “I tend to make a reflection of how I and we Catholics in general are being faithful and so I learned a lot from the talks before the dinner.”

Throughout history, many of the disputes have been based on religious ideologies. By bringing all the faiths together at the Iftar dinner, members of different religions could understand that similarities, like fasting, do exist.

“I think Jesus challenges us to go beyond tolerance. The more we can do to realize what we have in common, the better. Love one another, not club one another.”

Through these interfaith events, TCC Queens promotes its vision of interfaith solidarity, regardless of a particular group’s race, culture, language or religion.