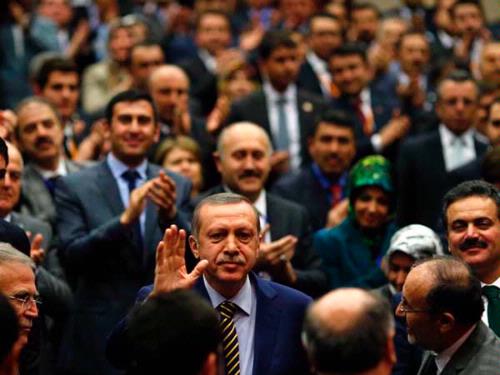 THE Turkish government’s troubled entry into an electoral campaign this year calls into question the government of Prime Minister Recep Tayyip Erdogan’s capability to lead his country to a consolidated democracy at a time when anti-democratic measures are being taken to cover up the highly publicized corruption scandal.

A protracted political turmoil with no end in sight, Turkey’s top political leaders are accusing each other of heinous acts. The crisis risks scuttling the vulnerable democracy set up in this only Muslim NATO nation, thanks to the incumbent government’s political will to eradicate what was popularly known as a “deep state” – a clandestine network of military generals, judicial officials, journalists and other public figures.

The recent troublesome developments in Turkey clearly indicate that Erdogan’s government didn’t only root anti-democratic forces out of state institutions; it is also now replacing them with his own tutelage.

Initial omens in the past few years displayed the government’s intention to build its own party regime in every field of the public and private sector. This troubling trend has picked up a momentum with four factors in the past six months.

The first challenge to the government of Erdogan was protests linked to Gezi Park near Istanbul’s famed Taksim Square. Government’s heavy-handed response to suppress the peaceful protesters turned violent. The protests spread to Turkey’s almost every province and more than 3.5 million people participated in the demonstrations.

This followed with a military coup in Egypt, where the country’s first freely elected president was overthrown by the powerful military. This was a rare opportunity for Erdogan to exploit the situation and he built up his rhetoric on a claim that there was “reverse regional coup to topple elected governments.”

It helped Erdogan’s ruling Justice and Development Party (AKP) convince its supporters that ultimate sovereignty belongs to elected officials and that what majorities want should be considered as a final say. “Democracy is only a ballot box,” was oft-cited slogan government officials and supporters used.

In November, Erdogan’s government was faced with another wave of discontent over the government’s intention to shut down prep schools. In addition, arrests and corruption raids in mid-December completely shook the political system, resulting in the resignation of three ministers and several ruling party lawmakers.

Idris Bal, an independent lawmaker who has recently resigned from his ruling AKP, said Turkey is going through a “regime crisis,” where separation of powers don’t effectively function. He mentioned anti-democratic measures taken by the government to cover up the investigation and blamed the authorities for subduing the judiciary through using the majority that voted for them.

Four weeks into the corruption raid that implicated sons of three ministers, businessmen and chief of the state bank, the government has endorsed a number of policies that buried the already nascent democracy.

Erdogan’s government removed thousands of police officials, reshuffled bureaucrats, appointed dozens of prosecutors to less influential ranks and it is on its way to adopt a law to restructure the country’s top judicial body – the primary body responsible for the appointment of judges and prosecutors. Ironically, the government lobbied only three years ago to revamp the judicial body, but it now asserts that it is dominated by members of an “illegal gang within the state.”

Observers argue that the latest political crisis in Turkey is a power struggle between the government and influential Turkish cleric Fethullah Gülen. Supporters of Gülen movement, known as Hizmet, reject the description, claiming that it is a ploy by the government to blame its woes on a civil society movement.

“In the past, governments also attempted to suppress social movements. But this had always resulted in more authoritarianism,” Gokhan Bacik, a professor at Turkey’s Zirve University, argued. He said the government should deal with illegal actions, if any, instead of launching a black propaganda against the Hizmet movement.

He warned against the danger that foreign investors may pull back from Turkey and argued that anti-democratic moves will have a negative impact on the government in upcoming local elections.

One of the most affected sectors amid the corruption scandal is the Turkish economy. The lira, Turkey’s local currency, significantly weakened against dollar in the past months and market value of Turkish companies lost nearly $47 billion in the past five weeks.

Economists argue that government’s intervention in judiciary and its arbitrary treatment of business actors are major reasons behind such an economic meltdown.

Numerous media reports claimed that the authorities attempted to sink Bank Asya, a business institution that is close to the Hizmet movement, by using state resources at a time when the country’s economy is too vulnerable to slight financial shocks.

Erdogan still enjoys high popularity among the public due to his ability to preserve stability after a decade of chaos, turmoil and economic crisis. What helped him gain the public’s support and achieve relative stability in the past was his democratic reforms and inclusive rhetoric. Will the new angry Erdogan, who undoes past positive reforms, can achieve this stability, remains a separate question. — Al Arabiya News