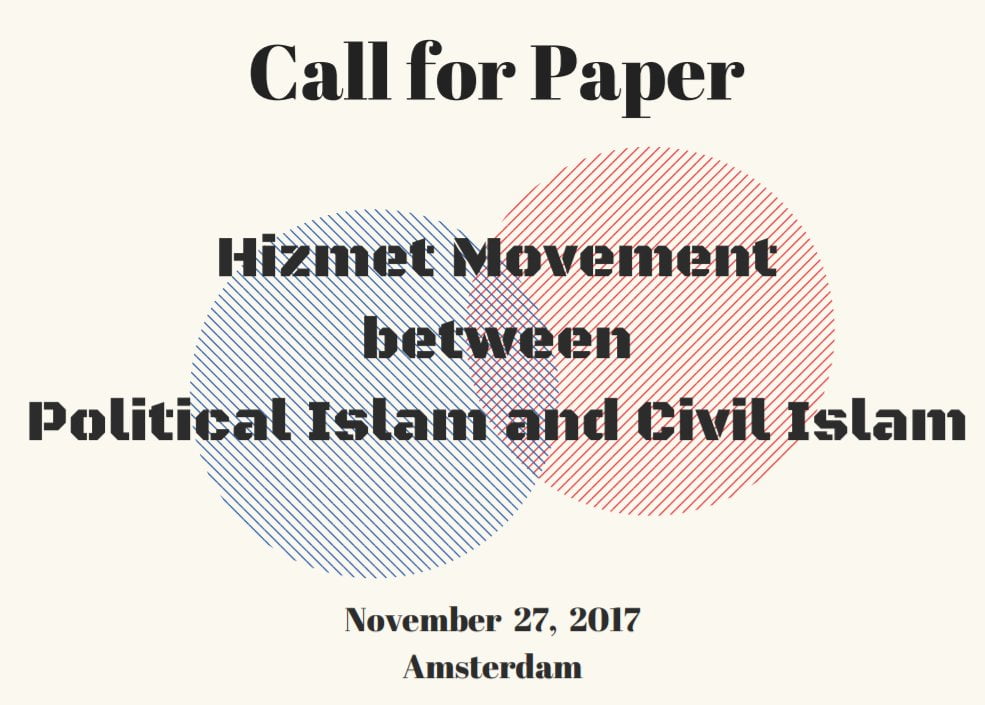 Hizmet-inspired European organizations are organizing an international conference to be held in November 2017 in Amsterdam. The workshop will examine the Hizmet Movement in the realm of political Islam and civil Islam.

This international workshop will examine the Hizmet Movement in the realm of political Islam and civil Islam. It will analyze the attitudes of Gülen and his followers to politics, political Islam, and modernity by addressing some of the below mentioned questions. Authors are invited to send abstracts (maximum 500 words) of their papers on themes and aspects of the workshop.

Islamism, post-Islamism and civil Islam occupy a prominent place in recent discussions on Islamic thought and public discourse about the relationship between Islam, Muslims, and power. Muslims’ discourses are characterized by a great deal of diversity in various contexts. They have been and currently are positioning themselves vis-à-vis central principles of modern political thought such as pluralism, secularism, gender equality, justice, democracy, citizenship, and minority rights. These different positions vis-à-vis these issues suggest how Muslims generate their understanding of society. Such positionings may figure as important forces or elements in transforming a society to or from an authoritarian regime. This positioning is classified by terms such as ‘Islamism’, ‘post-Islamism’, ‘civil Islam’ or ‘political Islam’. All of these terminologies have their own peculiar settings and understandings regarding their usage and context. Each has its influences and its Muslim practitioners.

Regardless of its semantics, ‘Islamism’ is used in popular and media discourse to refer to Muslim movements that advocate the search for Islamic solutions to political, economic, and social issues in public life. Framing a public action with an Islamic lens, reducing Islam to a kind of ideology presupposes Islam as politics. In The Future of Political Islam, Graham Fuller defines Islamism as linked to political Islam: “[A]n Islamist is one who believes that Islam as a body of faith has something important to say about how politics and society should be ordered in the contemporary Muslim World and who seeks to implement this idea in some fashion.” James Piscatori, a scholar of Islam, talks about Muslim politics as a kind of politics which derives from an agenda that talks of a specific political order, a particular political solution prescribed by Islamic principles that regulate religion in the public sphere: “Islamists are Muslims who are committed to public action to implement what they regard as an Islamic agenda. Islamism is a commitment to, and the content of, that agenda” (James Piscatori, Islam, Islamists and the Electoral Principles in the Middle East).

In many countries where Muslims are in the majority in terms of demography, the political developments that they have faced are pushing Islamism toward a ‘post-Islamist’ agenda. Political developments in the 2000’s opened debates on the crisis of political Islam and Islamism. The post-Islamist debates started with the participation of young Muslims who distance themselves from the utopian idea of “Islam as solution. The new generation maintains an Islamist agenda and values but has a critical approach to Islamist politics and is transitioning from Islamism to a new vision which some scholars call ‘post-Islamism.’ Post-Islamism can be understood as a continuation of Islamism with a new outlook and adaptation to liberal democratic values and a political project. Asaf Bayat says that post-Islamism is a return from Islamism of which the younger generation is wearied and which has lost its sources of legitimacy. He notes that post Islamism is “a conscious attempt to conceptualize and strategize the rationale and modalities of transcending Islamism in social, political and intellectual domains” (Asef Bayat, Islam and Democracy. What is the Real Question?). ‘Post-Islamism’ refers to Muslims who validate Islam in the public space as a source of tolerance, moderation, democracy, freedom and civil rights. In this regard, it is a transition from political Islam to civil Islam.

Contrary to earlier Islamist thinkers, there are alternative understandings of Islam that oppose the transformation of Islam into a political ideology with a state-centric view of Islam. According to these opponents of political Islam, the main focus should be the spiritual renewal of Muslims and their participation in social and civic life. This understanding is broadly termed ‘civil Islam’, as Robert Hefner describes it. The proponents of this understanding of Muslim politics oppose Islamism, fundamentalism, and political Islam. They maintain that Islamist thinkers monopolize Islam and use religion for political purposes. However, civil Islam proponents defend the promotion of education, dialogue to facilitate civil society, human rights, religious freedom, economic development, rule of law, democracy, and justice.

According to scholars such as Greg Barton, Fethullah Gülen and the movement that he inspires are one of the main proponents of Civil Islam. Gülen praises democracy, rule of law, and toleration in his writings. In his view, religion does not conflict with modernity and secularism. He does not oppose secularism and does not view the West as an adversary. Following his ideas, people in the Hizmet movement engage with democracy and pluralism. Islam is foremost a religion and faith that should not be used for political reasons or any ideological rhetoric. Instead, the primary concern is to gain God’s pleasure (rıza-i ilahi) by performing good deeds and by acting in an ethical way. In their view, democratic and secular values do not contradict their Islamic values; in contrast, a secular and democratic state guarantees opportunity to develop their piety in public life. The place of religion in the public space and its relation with the state is also crucial to analyze Hizmet’s understanding of Islam in public life. Other scholars, such as Hakan Yavuz, say that the Movement also has political aims expressed in its socio-political language that are different from the aims of political Islam. For these scholars, the Movement is too political and very assertive vis-à-vis state institutions: in the long term, although Gülen’s followers do not want to emphasize the Islamic state, the objective is to increase Muslim sensibility and share in the administration of Turkey. The tension with Turkey’s AKP, critiques of the Movement about its relation with the state apparatus, Fethullah Gülen’s conception of state and nation, and the Movement’s role as part of civil society should be re-explored to situate the Movement within the political Islam and civil Islam discussions.

This international workshop will examine the Hizmet Movement in the realm of political Islam and civil Islam. It will analyze the attitudes of Gülen and his followers to politics, political Islam, and modernity by addressing some of these questions: Does the Movement represent political Islam or civil Islam? Is it a liberal movement? What is the role of the Hizmet movement in encouraging democratic participation? Does it have an Islamic or Islamist agenda? What are the dynamics that explain the Movement’s ‘overtly political’ and ‘passively political’ actions? Is it an alternative to ‘secular Kemalist politics’ and ‘Islamist politics’ in Turkey?

Authors are invited to send abstracts (maximum 500 words) of their papers on themes and aspects of the workshop.

DERVİŞ GENÇ, AYTEN ÇİFTÇİ A two-day symposium during which Islamic scholars from 80 countries exchanged views about ijma, an Islamic term meaning religious consensus, took place in İstanbul over the weekend with participants discussing methods of achieving consensus and stressing the importance of solidarity and cooperation in solving global problems. The event, which was jointly […]