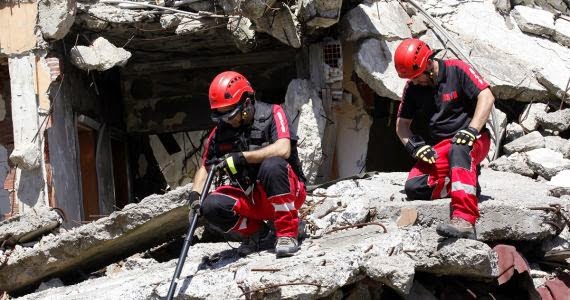 A photograph depicting Kimse Yok Mu ASYA efforts has ranked first at a photo contest held as a part of the 5th International Disaster and Risk Conference (IDRC) Davos 2014.

Held biennially and recognized as a leading one in the field, IDRC attracted over one thousand participants this year, including senior officials from UN, disaster management professionals, scientists, prominent civil society figures and NGO officials. This year’s event sought to offer solutions to problems regarding risk management, disaster reduction and resilience in a changing climate.

KYM’s international media coordinator Hatice Avci got the first place with her photograph on the foundation’s ASYA team, which responded to disasters in Pakistan, Tajikistan, Japan, Haiti, Indonesia and the Philippines. Avci received her award from Walter Ammann, the president of Global Risk Forum, organizing institution of the IDRC 2014.

In her address, Avci noted that she has been involved in various ASYA initiatives across the world. “The ASYA team is active with its rescue and disaster relief efforts around the world. It arrives in disaster areas and reaches out to victims immediately. I took this photo to show people how meticulous ASYA is in its work. Today, I am receiving this award on behalf of the ASYA team engaging in the Philippines, Japan, Haiti and Soma.”

Top-ranking entries will be displayed in the upcoming UN WCDRR Conference scheduled to take place in Sendai, Japan, in March 2015.