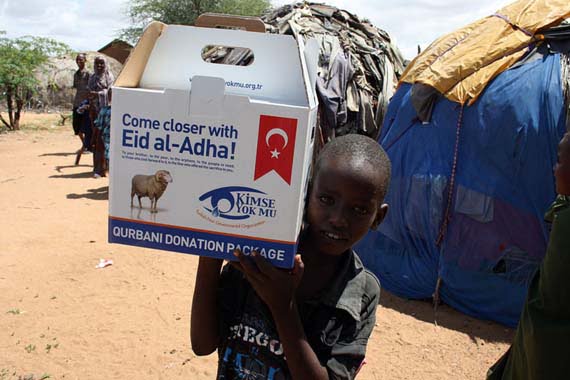 As Muslims around the world celebrate Eid al-Adha, or the Feast of Sacrifice, from October 25th to 28th, Turkey continues to promote the values of unity, love and charity through aid programs to those in need.

During Eid al-Adha animals are slaughtered to symbolise the Prophet Abraham’s willingness to sacrifice. Today’s tradition calls for a portion of the meat to be distributed to the needy.

In the spirit of the holiday, the Turkish state and charity organisations collect aid and food donations to distribute to vulnerable populations in Turkey and abroad.

Since 2005, when a devastating earthquake struck Pakistan, the Turkish Red Crescent has provided humanitarian assistance during Eid al-Adha. That year, the Turkey provided Pakistani quake victims with 9,000 sacrificed cattle.

The Turkish Red Crescent has since boosted its aid campaign, including to Pakistan, Sudan, Palestinian Territories, Bosnia and Herzegovina (BiH), Macedonia, Serbia, Moldova, Somalia and Myanmar.

Last year the Turkish Red Crescent carried out the slaughter and distribution of 5,870 sheep and goats, and 750 cattle for nearly 35,500 families. This year’s aid will be determined by donations of the Turkish people.

The Turkish Red Crescent does not make a distinction between Muslims and non-Muslims.

“Our aim is not only to provide people with meals, but also extend the helping hand of the Islam, along with all traditions like celebrating together at the centre of the village,” Cetin added.

The activities of the Turkish Red Crescent run parallel to charity projects by civil society groups.

In 2011, the organisation distributed meat to 179,043 families in 43 countries during Eid al-Adha. This year, organisation officials aim to reach 70 countries located in Africa, Asia, the Balkans and the Middle East.

“Such aid contributes to positive feedback for Turkey in terms of prestige, recognition, credibility and improved trade relations with all those countries which have a deep trust in our country,” Yusuf Yildirim, the association’s director of foreign aid, told SES Türkiye.

“When selecting needy families, we first do social research to identify the right people. Especially in such festivities, we are bringing with us various toys to give those children in different countries. Just that little smile makes us forget all the distance we made to reach them,” Yildirim said.

Yardimeli Derneği, another charity, is planning to distribute meat in Turkey and nearly 30 countries with donations provided by citizens.

Mehmet Deri, the media co-ordinator of the association, said that although the aid provided during the holiday is “just a drop in the ocean,” the organisation’s presence allows them to make projections about future aid activities.

“In this way, we assume that our association, with other charity groups in Turkey, had important contributions to the development, education, health and poverty problems in the problematic geographies,” he said.

The association launched a project in 2008 called “Sister Families,” which pairs a Turkish donor family with needy families the Balkans, Asia, Africa, the Middle East and the Caucasus regardless of religion.

In the Balkans, thousands of families have benefited from Turkey’s support. In BiH, the Merhamet Association works with the Turkish Red Crescent and the Turkish Development Agency.

“We are grateful to the people of Turkey, Turkish government and Turkish humanitarian organisations who have helped us before, during war and now, 20 years after that period. They still continue to provide assistance to BiH citizens who are in need through our organisation,” Hajrudin Šahić, president of the association, told SES Türkiye.

The Osman Hulusi Efendi Foundation, based in the Central Anatolian city of Malatya, has been helping needy families in BiH for years, especially those who were displaced during the war in the early 1990s.

During the holiday meat is provided to families like that of Mumin Karic, who several years ago answered a knock on her door to find a sheep had been donated to her family.

“They had heard that we were living under very hard conditions and they decided to help us even though we do not know each other,” Karic said.

“Since then, several times a year, good people come to our home from Turkey, donate something and talk with us,” she said. “They are interested in the everyday life of ordinary people. They have done a lot for me and my family and we consider them as friends, not acquaintances.”