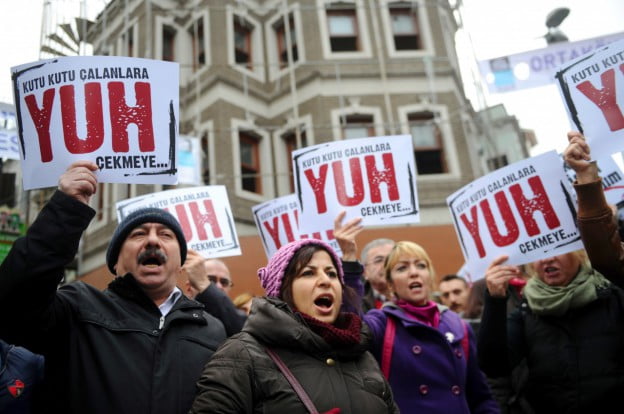 People hold placards reading ‘Shame to thieves with Boxes’ during a demostration on December 29, 2013 in Istanbul against corruption and the Government. Turkish Prime Minister Recep Tayyip Erdogan lashed out at the judiciary as he tried to tamp down a corruption probe that has shaken his government and sparked a new wave of anti-government protests. (Ozan Kose/AFP/Getty Images)

You’re listening to HERE AND NOW. Transcript provided by NPR

A corruption scandal has forced Prime Minister Recep Tayyip Erdogan to reshuffle his cabinet, but he is rejecting calls for his resignation.

Three of his ministers have resigned because of the scandal, which the prime minister blames on outside forces.

But anti-goverment protests flared up again last week just as they did this past summer. The situation today is being called the biggest threat yet to Erdogan’s 11 years in office.

(Listen to the program)

Stephen Kinzer, visiting fellow at the Watson Institute For International Studies at Brown University. His latest book is “The Brothers: John Foster Dulles, Allen Dulles, and Their Secret World War.“

In Turkey, Prime Minister Recep Tayyip Erdogan says he has no plans to step down despite allegations of corruption in his government, a scandal that cost three members of his Cabinet their jobs last week and played in the streets as police fired tear gas and rubber bullets at anti-government protesters in Istanbul’s Taksim Square. You might remember that the square was also the scene of huge protests this summer when demonstrators fought with police over Erdogan’s plans to develop a park and the general feeling that he was taking the secular government in an Islamic direction.

Speaking to the Turkish parliament last week, the prime minister blamed the turmoil on outside forces.

PRIME MINISTER RECEP TAYYIP ERDOGAN: (Through Translator) We are facing an attack against the Turkish people and the Turkish republic. Everybody’s aware that this is not a corruption probe, but this is an obvious conspiracy, a set up against Turkish politics and people.

YOUNG: Stephen Kinzer is a former New York Times bureau chief in Istanbul. He’s now a visiting fellow at the Watson Institute for International Studies at Brown University and came up from Rhode Island to join us in the studios. Welcome.

STEPHEN KINZER: Good to be here.

YOUNG: So let’s talk Turkey. I’m sorry. I could not help it. But remind us why we care. Just remind us the role that Turkey plays, why it’s been an ally of the U.S., what the role it plays in the region.

KINZER: Turkey became independent in 1923. And all the way from then until about the year 2000, it was not an important country because it was way off on the edge of everything. But once the Cold War ended and this artificial boundary that had divided Eurasia evaporated, Turkey returned to the place that that piece of geography has always occupied in history. When you control Turkey, you control the keys to the entire Slavic world, the Mediterranean world, the Middle East. You got the Caucasus, the Balkans.

YOUNG: You got an empire, yeah.

KINZER: So now, Turkey has – really in the last 10 years – returned to history and played a unique role in that part of the world.

YOUNG: It was also seen as a moderating force, that’s why there’s been concern that the prime minister is seen as taken this secular government in a more Islamist direction. But what about his saying that this corruption scandal is a set up? You say what?

KINZER: The technique of trying to portray troubles in Turkey as the result of outside meddling is something that resonates well with Turks. Turks are big into conspiracy theories. They like to think the whole world is plotting against them. And this has a genetic basis almost because back in the 1920s, that is what the world tried to do. All the great powers got together and decided to slice up Turkey into little pieces and parcel it out to other countries. So that’s still in the minds of Turks. And because of that, when you are in trouble as a Turkish politician, your first instinct is to say that there’s been a foreign conspiracy.

In this case, however, I think – particular because Turks have become so much more educated and because they are more aware of the various factors that are real inside Turkey, not just outside influences, I think that argument is a little bit thin.

YOUNG: Well, that brings us to one of his critics – I don’t know if I’m saying this correctly – Fethullah Gulen?

KINZER: I don’t think he’s listening because even though he’s been some 20 years in the United States, he doesn’t speak English. But maybe he’s got somebody translating. Yeah. So Fethullah Gulen is really a fascinating figure. He’s a Turkish cleric now 75 years old. He’s been living many years in a compound in the Poconos in Pennsylvania. He has enormous influence through a movement that he has founded in Turkey. And this movement has also spread throughout the world. It has had tremendous influence in Central Asia, in Africa, in other parts of the world where there are Muslim populations. There are hundreds of Gulen schools all over the world, including in the United States.

Inside Turkey, Gulen as a cleric has also been somebody who eased the way for the rise of Tayyip Erdogan and this kind of moderate of religious politics. But now what’s happened is that the Gulen movement seems to be splitting with Erdogan. So you have two leaders who see themselves as based in religion, one political and more social and religious, clashing with each other. And this is the first time that a figure of this magnitude has directly confronted Erdogan.

YOUNG: Tell us more about this split. Are you saying that Erdogan, when you say more political, you know, relaxing the ban on headscarves and women in government, that as opposed to what has Gulen stand for.

KINZER: Gulen is, I think, a person who wants religious moderation. He is a Muslim but he’s a great – he’s met with the pope. He’s a great believer and – better relations with the Orthodox Church also in foreign affairs. He has been much less confrontational than Erdogan. For example, he has strongly criticized Erdogan for his break with Israel after the flotilla Mavi Marmara incident a couple of years ago. So in a number of ways he has let his followers know that he thinks Erdogan is becoming too self-centered, too much like a sultan, grabbing too much power into his own hands and is forgetting the generosity that is supposed to be at the base of religious political movements and turning into – turning it into something more cynical.

YOUNG: I’m just – I’m fascinated by this. So just, very briefly, so he’s in exile in Pennsylvania, has been for a couple of decades, and there are schools here in the U.S., Gulen schools. What are they teaching?

KINZER: They are regular high schools. They’re charter schools. You can find them in Texas. You can find them in many other states. And they play a very interesting role. I think in much of the Muslim world they are a great moderating force. They always have boys and girls. They teach a very moderate idea of Islam. In Turkey, however, Gulen is a huge force. And actually the clash between Gulen and Erdogan set off this last crisis in a particular way.

One of the big businesses of the Gulen movement in Turkey is the running of a large network of prep schools that – where kids can go to prepare for the highly rigorous and intensely competitive college entrance exams. Erdogan announced one day he’s closing down all those schools. This was not only a shock to many Turkish families who really want to count on those schools to educate their kids and prepare them for these exams, but it was a direct blow against Gulen. And I think it was the last moment when you might have thought that the Gulen-Erdogan controversy might just be quiet and below the surface. Once Erdogan took it public by directly confronting one of the main Gulen enterprises in Turkey, that began a split that we’ve never seen before in the Erdogan era.

YOUNG: Huh. You give us a fascinating insight into what’s behind these constant upheavals that we see in Turkey. Just briefly, we have about a minute left, you wrote a book, “Reset: Iran, Turkey, and American’s Future.” You made the case, and I think it was 2010 in that book, that the U.S. should be reaching out, maybe even aligning itself with Iran and Turkey. Ironic that the U.S. is having these problems now with Turkey – a big meeting was canceled a week and a half ago because of this corruption scandal – and maybe reaching out more to Iran.

KINZER: It’s remarkable, I tell you. I’ve had so many requests in the last few months to talk about that book. But let me tell you what’s changed. When I published that book, suggesting that our best allies would be Turkey and Iran, people said, well, Turkey, yes. But Iran seems impossible. Now with what’s happening, I’m hearing the opposite.

YOUNG: Right. Stephen Kinzer, a visiting fellow at the Watson Institute for International Studies at Brown University and, of course, New York Times Istanbul bureau chief for so many years. Time has run out. We can’t have you speak Turkish to us. Stephen, thanks so much.