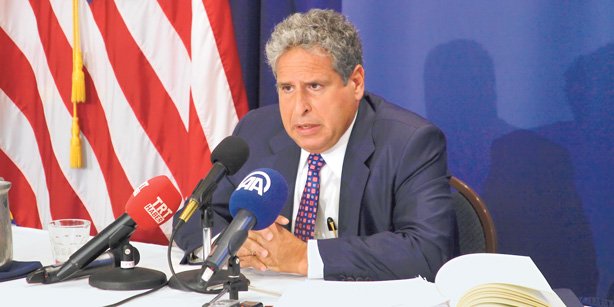 Robert Amsterdam, founding partner of the Amsterdam & Partners LLP, is seen during a press conference held in Washington. (Photo: Cihan)

Robert Amsterdam, founding partner of Amsterdam & Partners LLP, a London-based law firm, said in Washington on Monday that the Turkish government had hired the firm to “conduct a global investigation” into the activities of the Gülen movement, also known as Hizmet.

“We have been retained by the [Turkish] Republic to expose allegedly unlawful conduct by the Gülen network worldwide,” Amsterdam said during a press conference, which was not publicly announced. Only hand-picked pro-government Turkish media were invited to the briefing, and the live broadcast of the event was cut when the floor was opened to questions.

It was not clear how much the Turkish government is paying for the firm’s services, but a Turkish whistleblower claimed last month that the firm officially gets $50,000 monthly and “millions” under the table. Monday’s press briefing confirmed the claim put forward by the whistleblower known as Fuat Avni, who has a long history of credible reporting from inside the government in Ankara, that the firm had been hired.

The briefing was primarily designed to clarify the work to be done by the law firm, which has been under fire from Turkish critics for extending Ankara’s witch hunt abroad and for being a mouthpiece for the Turkish government. The hired lawyers attempted to justify their work for the government, which has become synonymous to many with an anti-democratic crackdown and a lack of accountability. Borrowing from Turkish President Recep Tayyip Erdoğan’s narrative, Amsterdam said the movement is trying to “overthrow an elected government in Turkey,” reiterating the government line that has been used since twin corruption investigations targeted Erdoğan and his inner circle. Erdoğan accused the movement of being behind the corruption scandal that implicated him and senior members of his government in December two years ago.

The firm was retained by the Turkish government after officials failed to convince other governments to shut down overseas schools and charity organizations linked to the Gülen movement. Amsterdam, flanked by his partners in a small room at the National Press Club, displayed three charts with schools and other educational facilities in other countries that are inspired by the Gülen movement.

Amsterdam’s briefing was immediately picked up by the pro-government Turkish media and reported as though it was a formal statement of US policy against the Gülen movement. The Sabah daily, owned by the Turkish president’s son-in-law, said “a coup from the US” in the headline for the story on the press conference.

In İstanbul, Mehmet Kasap, chairman of the Law and Life Foundation, said Amsterdam’s accusations are “very serious” and need to be proven.

Pointing out that Amsterdam violated the presumption of innocence, Kasap said there is no such crime as the existence of a “parallel structure.”

The “parallel structure” is a term invented by then-Prime Minister and current President Erdoğan to refer to followers of the Gülen movement.

“Amsterdam is not putting forward any proof; it is just hearsay. I believe the lawyers for the Gülen schools and any other parties involved in the case will press charges, should they feel the need,” he said.

Amsterdam said the activities of the Gülen movement “should concern everyone who cares about the future of democracy in Turkey.” The lawyer’s remarks stood in dark contrast to the anti-democratic credentials of his client, the Turkish government. The government has recently been targeted by rights groups for gravely abusing rights, restricting freedoms and cracking down on critical media. As Amsterdam spoke about how the movement is detrimental to Turkish democracy, Turkish authorities moved to seize the country’s leading media group, İpek, just days before a key election.

After the briefing in Washington, US Congressman Todd Rokita said 65 US lawmakers had submitted a joint letter to President Barack Obama, highlighting concerns about the “Turkish government’s dedication to the democratic process.”

Amsterdam also took a jab at this newspaper for its “misleading and defamatory reporting.” Today’s Zaman earlier reported on the government whistleblower’s remarks that said the law firm will use its clout in Africa to push African governments to close down schools associated with the movement, which are known to provide education to often the most unprivileged children in less developed countries. The whistleblower also reported on Erdoğan’s “glee” when his advisers told him, “There is nothing, even illegal jobs, that we can’t make this law firm do.”

Amsterdam described the news article as “shameful” in a country like Turkey where he claimed “press freedom is sacred,” contradicting Turkey’s poor record on upholding media freedom.

Nurullah Albayrak, the legal representative of Fethullah Gülen, who resides in a rural Pennsylvanian town and is the inspiration for the movement, interpreted the press briefing as confirmation of the whistleblower’s claims.

Albayrak said the money paid to the British law firm is a “waste of public finances,” as Amsterdam did not put forward any evidence to back up his claims. “Someone must have misled this law firm, or they have misled themselves” he added.

*Arif Tekdal from İstanbul contributed to this report.