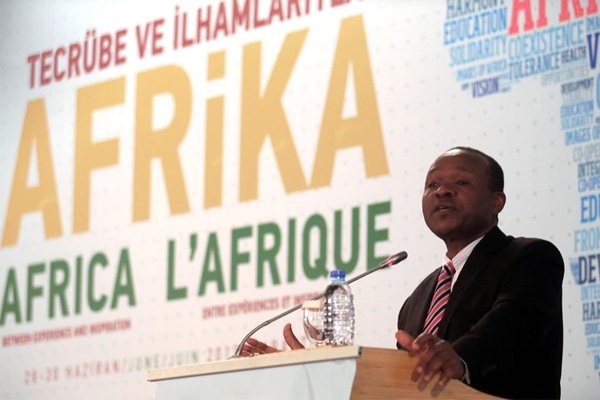 The event was organised by the Journalists and Writers Foundation (JWF) of Turkey under a dialogue initiative it established known as Abant Platform, one of the world’s foremost civil intellectual forum. The Platform was established to organise events for promoting peaceful coexistence and tolerance and dialogue. This year’s forum is the 29th in the series and it had five interesting topics. Among them was Africa: Images and Realities, Contribution of African Values to Universal Coexistence and Education in Africa: Challenges and Opportunities. Others were Health in Africa: Challenges and Opportunities, Economic Development in Africa: Different Approaches to Sustainable Growth. The participants were intellectuals, journalists, leaders, activists, and academics from drawn from Africa, across the world and were joined by local counterparts representing various groups. The Nigerian delegation had two academics and two journalists. Professor M. O. Faborode, former vice Chancellor and current Secretary General of the Committee of Vice Chancellors of Nigerian Universities, Professor Tijani Al Miskin of the University of Maiduguri, Mr Sam Nda-Isaiah, the Chairman of Leadership Newspaper and my humble self. Our invitation came through JWF partners working in Nigeria the UFUK Foundation and its President, Mr Oguzhan Dirican. He organized the travel to Turkey and coordinated other activities that introduced us to Turkey’s rich civilization and interesting cultural heritage.

The opening ceremony had the theme Africa: Images of Realities and it featured welcome addresses from the organisers through the President of the JWF, Mr Mustafa Yesil and the Governor of Bolu the host city. It also featured a panel discussion that had ministers of education from Mali, the Democratic Republic of Congo and a professor from Chad Republic.

In their contributions the panellists drew attention to the rich cultural heritage of Africa, the impact of colonialism on the continent and the relationship between Turkey and their various countries. There were also contributions from the floor. In his contribution, Professor Tijani Al Miskin mentioned that UFUK Foundation’s coordination made participation of the Nigerian delegation possible and commended the Foundation. He also traced the close historical relationship between Kanem Borno Empire and Turkey. He cited the Ottoman Empire era as the ‘golden age’ of Turkish civilization. During this period, Professor Al Miskin said military empowerment from Turkey helped Borno Empire to resist colonial incursions.

Another contributor, Dr Mohammed Bakare from Kenya who teaches in Turkey focused on the diversity of Africa, a continent of 1 billion people and 56 countries. He underscored the need for specialist from the various regions of Africa to teach the politics, economy and social aspects of this complex and diverse continent. He urged journalists from Turkey to learn and inform their audiences about Africa and their counterparts from Africa to inform and educate their people about Turkey. He cited the importance of decolonization movement in Africa how it connected with Afro Americans and jointly promoted Pan Africanism, establishment of the Organisation of African Unity (OAU) and subsequent emergence of the African Union (AU).

Ambassador Moussa Dourfaye from the Embassy of Niger Republic in Turkey said that ‘Turkey has been conducting its cultural diplomacy very well. He also noted that it is important that assistance should directly go to communities in need and that there is a need for transformation in the channels of assistance to Africa. Another diplomat from Kenya, Lindsay Kiptiness, acknowledged the problems in Africa, while stating that Africa should be taught to fish instead of being given fish by others.’ On his part Mr. Sam Nda-Isaiah, said ‘Africans must start developing their own economies given the vast resources that the continent offers.’ Ambassador Ahmedou Ould Abdullah, a former UN special representative from Mauritania, on the other hand, observed that ‘corruption undermines competition in Africa, causes young people to lose hope in the future and leads them to turn to violence.’

A contribution from a Turkish dignitary hit the nail on the head, when he directed attention to the gap between North and South Africa, a former Deputy Prime Minister of Turkey, Ekrem Pakdemirli, said that aid from developed nations should be distributed to close this gap. He further said that ‘Turkey cannot be present in Africa in heavy industry like China or India, but can invest in agro-industry, education and health services in Africa. He stated that countries that invest in Africa should not have a colonialist mindset in order to be welcomed there. His observation is very true of Turkey’s investment in education and health Nigeria. This which includes Turkish secondary schools in Abuja, Kano, Kaduna, Yobe, and the Abuja based Turkish Nile University. In the health sector, the Abuja ultra modern Nigerian- Turkish Nizamiye Hospital is set for launching. When it begins operations, it will offer vital services that have forced many Nigerians to travel abroad for medical attention. The civil engineer in charge of construction of many Turkish construction projects in Nigeria, Engineer Hakan was also one of the participants at the Abant Platform Forum in Turkey.

The second plenary session was on Contribution of African Values to Universal Coexistence. I participated in the session and presented a paper titled The Contribution of African Social Values to Global Peace. The paper cited the conflicts in Africa involving national armies which revolve around conventional mechanisms. It posits that these have excluded the traditional approaches whereas there is a greater demand for this now in the contemporary world, particularly in Africa. I also shared the experiences of grass root peace-making efforts among the local communities. Examples cited were sulhu among the Hausa in Nigeria, forest peace meetings of the Kidepo Valley of Eastern Equatoria and the Karamoja and Dodos of Uganda forest region and several others examples. The other panellists were Dr. Thabo Makgoba, the Anglican Bishop from South Africa who presented a paper on the concept of Indaba which is about a place of gathering for a purposeful discussion and Unbutu which is about appreciation and common good. ‘It is also about treating people as we want them to treat us. In politics, using unbutu is about debating ideas avoiding hate and bad governance.

Ambassador Abdul Mumin, the Chancellor of the University of Peace in Africa based in Costa Rica presented a paper on Africa and the Millennium Development Goals. It discussed Africa’s ongoing efforts to achieve the goals. The next write up will discuss the other sessions and the outcome of the forum.