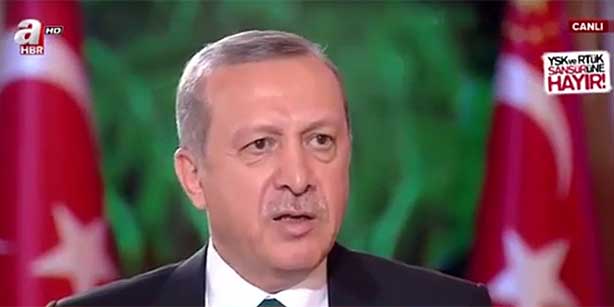 President Recep Tayyip Erdoğan is seen during an interview with pro-government A Haber in this still image made from a video of the interview.

“Here, there are some special steps we have taken that will have them [members of Gülen movement] experience a different future,” Erdoğan said in an interview with pro-government A Haber. He also asked the government to work quickly for Parliament to pass the required bills and realize what he said was the “cleansing” of the “parallel structure.”

“This is nothing but an admission of guilt that what they have been doing so far as part of the witch-hunt was unlawful. They want to dress it up with a legal pretext,” Erdal Aksünger, the chief aide to main opposition Republican People’s Party (CHP) leader Kemal Kılıçdaroğlu, told Today’s Zaman. “‘Cleansing in the state’ is a hate speech,” he added.

Aksünger also predicted the government may escalate the witch hunt into a mass mobbing by changing the law on the civil service.

Toker noted the most distinguishing factor in one-man regimes is that “whatever the one man in the executive branch says will be done right away.”

“Neither the judiciary nor anyone else can interfere nor can anyone exercise an oversight role. In the meantime, there will be no measures to prevent a certain group in society from being demonized by hate speech,” he underlined.

The “parallel state” is a derogatory term and a great hoax created by the president to refer to sympathizers of the faith-based civic group Hizmet, popularly known as the Gülen movement and inspired by the views of prominent Turkish Islamic scholar Fethullah Gülen.

The ruling Justice and Development Party (AK Party) government and President Erdoğan have redesigned the police force and the judiciary, claiming a “parallel structure” within the state is planning to overthrow the ruling government via the graft probe.

A witch hunt has been carried out against many members of the police force and judiciary since Dec. 17, 2013, when a major graft probe was revealed following police operations into people from AK Party circles. The operations even implicated family members of then-Prime Minister Erdoğan. Following the breaking of the scandal, Turkey saw the biggest reshuffle to its police force, judiciary in history.

Toker pointed out the AK Party government has obtained the majority in Parliament with 317 seats.

“Erdoğan is sending signals by saying there are things to be done via new bills and constitutional amendments. They will do anything they like and will do so under the pretext of legislative changes,” he explained.

The last time Erdoğan initiated a special project against the Gülen movement was last year when he established new investigative courts called courts of peace. They are also known as specially authorized courts with extraordinary powers that contradict universal rules of law. The opposition says these courts were staffed with loyalists and partisans who have little regard for the rule of law.

The criminal courts of peace act as “closed circuit” courts. Appealing a judge’s ruling can only be made with the same court and often to the same judge who issued the original ruling. They were designed by the government to pursue its critics and opponents by orchestrating what many have said are sham trials in politically motivated cases. These courts have made extremely controversial rulings against a number of people and companies critical of the government since their establishment.

Masum Türker, the chairman of the Democratic Left Party (DSP), believes the witch hunt by Erdoğan will escalate further, which the president’s televised remarks support.

“With the exception of foreign diplomats and embassies, they [AK Party government] will bring everyone under their control and supervision,” he stated.

“If they desire, they can seize all companies, foundations, civil society organizations and even appoint trustees to take over political parties,” Türker added, arguing the government has already set up the infrastructure for that in the judiciary. “A prosecutor demands [something] and a judge approves right away,” he lamented.

According to the DSP leader, the government is keen to place all media outlets under its strict control as well as completely overhaul the civil service by changing the law.

In the TV interview, Erdoğan also claimed Gülen movement is part of the category invented in the National Security Council (MGK) meeting he chaired. The term “parallel structure” that appears to be legal was reportedly approved by the MGK meeting last year and Erdogan stated this term targeted the Gülen movement.

Deputy Prime Minister Bülent Arınç who attended to the same meeting disputed that however, saying the MGK recognizes the “parallel state structure and illegal structures disguised as legal structures” as being threats to national security, but said this was a broad definition that is not specific to any group.

Noting that the MGK has ceased to be a main security agency of the state a long time ago, Türker said the MGK is simply acting as a subcommittee of the government and does the AK party’s bidding.

Yusuf Halaçoğlu, a Nationalist Movement Party (MHP) deputy and candidate for the position of Parliament speaker, described Erdoğan’s remarks as “hateful and vindictive.”

“The claim that these people [members of Gülen movement] are terrorists have no credibility whatsoever,” he emphasized. “If they [Erdoğan and the AK Party] are able to do so, they will do anything and everything,” he told Today’s Zaman.

Pointing out that Erdoğan used the word “cleansing,” Halaçoğlu said Erdoğan and his associates in the government have been contemplating changing the law on the civil service to conduct a witch hunt and mass purges.

“Dismissing employees from the civil service merely on allegations without any due process or strong evidence is nothing but a political massacre,” he described.