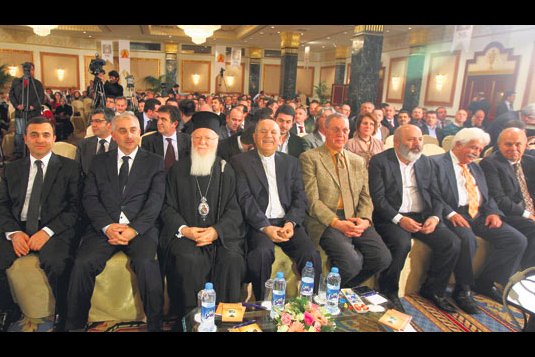 Journalists, politicians and writers gathered together for a forum in İstanbul on Tuesday to mark the launch of renowned Islamic scholar Fethullah Gülen’s latest book, “Yaşatma İdeali,” (The Ideal to Let Others Live).

Gülen sent a message to the participants of the gathering in which he dwelled on the importance of self-sacrifice for others.

“As you will agree, a person who only thinks of himself is not a human at all, but a human with a deficiency. The way real humanity can be achieved is through self-sacrifice for others. The value of a person in the eyes of God can be measured by the level of their benevolence. The most obvious sign of a high level of benevolence is sacrificing one’s personal pleasures and joys for the happiness of others,” Gülen said in his message.

A panel discussion sharing the name of Gülen’s book was organized for the event. Professor Mehmet Altan, also a journalist and writer, presided over the panel. Delivering a speech to the panel, journalist Şahin Alpay talked about the contribution made by Gülen’s followers through the opening of schools all around the world. He said these schools are of great benefit to humanity and will play a significant role in raising new generations.

The Gülen movement is a group of volunteers engaged in interfaith and intercultural dialogue, inspired by the ideas of Fethullah Gülen, whose teachings promote mutual understanding and tolerance between cultures. Now residing in the US, Gülen has pioneered educational activities in a number of countries, along with efforts to promote intercultural and interfaith activities around the world.

Former DP leader Soylu said, having read Gülen’s latest book, it could be described as a guide for the world which diagnoses the “the diseases of this era” and proposes treatments for them.

Media Association President Memecan said: “Recently, the identity of the individual has been highlighted while being a human being has been placed on the back burner. We should not forget humanitarian values just for the sake of promoting individual identity. People are thirsty for dialogue, but despite this we have become a society in which we are alienated from each other. I have learned much from the speeches made here. It is obvious that I will learn much from the book, too.”

Professor Altan said the most difficult thing in life is to become a human being; hence intellectuals should open dialogue on the importance of being one. “The ‘ideal to let others live’ is a crucial concept for me, for it looks at life from above the human and accepts that humans are the most valuable and sacred beings. Culture injects into us the notions of a religion, ethnicity or a religious sect more than the feelings of humanity. We cannot cope with problems when we divide people into religions, languages and ethnicities. This panel discussion is a step forward to overcoming these problems,” he said.