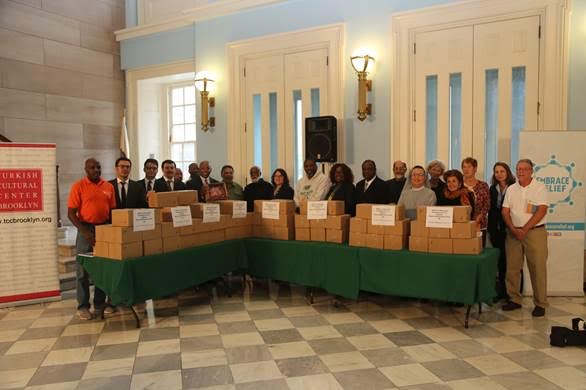 Last week, BP Eric Adams announced the donation of 1,500 lbs of meat to food pantries across the borough in accordance with the celebration of Eid-Al-Adha.

Also known as the Feast of Sacrifice, in this Muslim festival, observers distribute meat among their community as a form of charity. It is a form of commemoration of Abraham who was tested by God to sacrifice his own son.

“Hunger knows no religion,” said Adams. “I am delighted to be a conduit to assist food pantries in Brooklyn to fulfill the commitment of the Muslim community on Eid Al-Adha. Regardless of your religious persuasion, this is a bright day for Brooklyn, a bright day for our local food pantries who tirelessly feed thousands of individuals who are in need.”

For the initiative, Adams’ office partnered with the Turkish Cultural Center Brooklyn, a non-profit based out of Sheepshead Bay, and Embrace Relief, a global organization that works to provide relief efforts in areas struck by disasters.

The food donated went to 14 food pantries throughout the borough, including two in Williamsburg –Los Sures Social Services and the Trinity Human Services Corporation.

“Many thanks go to the Turkish Cultural Center Brooklyn, Embrace Relief, and Adams for thinking of our clients and donating meat to our Trinity Human Services Corporation Food Pantry,” said Sister Woohee Sofia Lee of the Franciscan Missionary Sisters of Assisi. “We always hope to add good protein and fresh produce in the bags we offer those in need of food. A donation like this is a godsend. We will share it with those in need, the best way we can.”