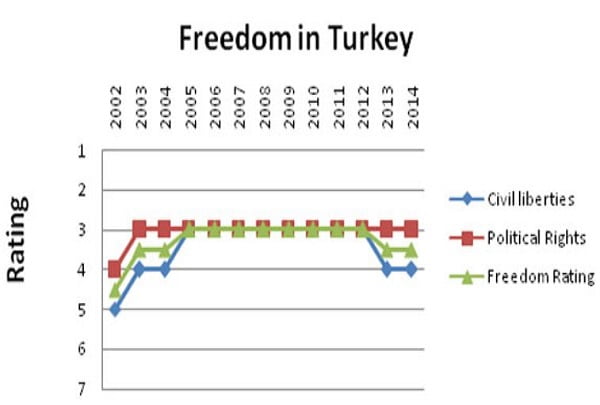 Last week, the NGO announced its 2014 report, which showed Turkey to be one state that relies on “modern authoritarianism.”

The Freedom House survey measures calculates freedom ratings by taking the average score of a country’s political rights and civil liberties. Countries are categorized according to this average score thus: Free (1.0 to 2.5), Partly Free (3.0 to 5.0) or Not Free (5.5 to 7.0).

Political rights are understood as free political participation, the right to vote, join political parties and compete for office, or the level of electoral democracy. Civil liberties comprise the freedoms of expression, media, the Internet and belief, associational and organizational rights, the rule of law, human rights and personal autonomy without interference from the state.

Although modern authoritarianism is not a term often used in political science, the Freedom in the World 2014 report used the term to describe Venezuela, Ecuador, Russia, Ukraine, China and Turkey.

Modern authoritarianism is a significant phenomenon and an attitude of leaders who disregard the opposition and challenge it without annihilating it, and who disrespect rule of law while pretending to be the protector of order, legitimacy and prosperity. Modern authoritarian leaders and states undermine political pluralism and aim not only to monopolize the government and parliament, but also the media, the judiciary, civil society, the economy and the security forces.

Turkey was categorized as such due to Prime Minister Recep Tayyip Erdoğan’s tactics to eliminate critical journalists and media outlets. Erdoğan, to preserve his power, has tried to control the media, usually by imposing unexpected tax fines on media owners and putting pressure on them to fire journalists critical of the government.

The report explains that the government’s authoritarian tendencies have increased. Its response to the Gezi Park protestors and pressure on businesspeople seen as critics of its agenda are highlighted as major examples of how modern authoritarianism is employed.

Critics who express any kind of disapproval of actions of the government have been perceived as a part of coup plot associated with foreign cabals and accused of “treason.”

Erdoğan has denounced the Gezi Park protesters in June 2013, the Hizmet movement sympathizers, journalists who reveal confidential state documents, police chiefs, prosecutors and judges who have been involved in recent operations of the probes into alleged corruption and finally Turkish Industrialists and Businessmen’s Association (TÜSİAD) President Muharrem Yılmaz as traitors for their actions, speeches, dissent and warnings against the government. Soon, if you criticize the Justice and Development Party (AK Party) or Erdoğan, you will be called a traitor.

The most recent sample is related to TÜSİAD, which represents Turkey’s top business conglomerates that make up almost half of Turkey’s industrial production and employment in the private sector. In his speech at the 44th TÜSİAD General Assembly in Istanbul on Jan. 23, Yılmaz warned the government that without the rule of law and transparent policies with respect to EU norms, the Turkish economy will face a serious crisis and have no chance of attracting direct foreign investment that the economy needs to survive.

Since the corruption probes started, the Turkish lira has been devalued against the US dollar by around 30 percent in the last month and a half. Yet, Turkish business chambers have remained silent. Because almost all chambers of commerce are aligned with the government and their presidents and executive boards consist of pro-AK Party members.

Their elections and the formation of their boards came under strict pressure of the government. They are aware that if they speak about wrongdoings of the government, they will be punished in the way that businesspeople of movement supporters and TÜSİAD members have.

Unfortunately, this configuration destroys Turkish democracy as well as the economy. Steven Levitsky, a comparative political scientist, and professor of government and social studies at Harvard University’s Faculty of Arts and Sciences and Lucan A. Way, an academy scholar at the Academy for International and Area Studies at the same university, have studied numerous cases of authoritarianism and found that the more that Western leverage is limited and the fewer the connections to the West are, the greater the chances for the survival of authoritarianism. A powerful ruling party with an efficient economy, geographical distance to a Western country and a functional bureaucracy are also complementary factors for survival.

Turkey’s case thoroughly fits the academics’ findings. The government has already been distancing Turkey from the EU since 2007 and preferred independent foreign policy. After gaining half of the nation’s vote in the last general elections, the AK Party considers itself powerful, unchallengeable and invincible. Erdoğan and his government have started to set plans for Turkey for 2023. All of these have caused a decline in Western leverage and links to Turkey and the emergence of authoritarian tendencies. However, Erdoğan has underestimated the reality that without civil liberties in universal standards, it is not possible to govern the country any more. Turkey’s economy and stability depend on its commitment to liberal democracy rather than modern authoritarianism.