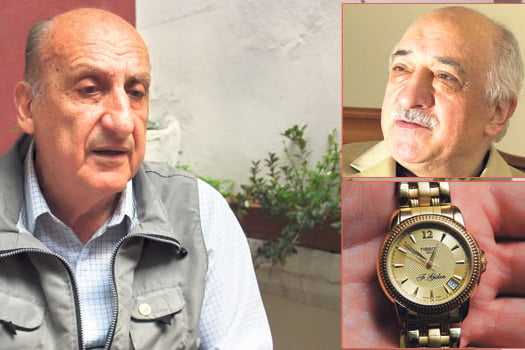 Hagop Arzumanian,  a former soccer referee, is an Istanbul born Armenian. Arzumanian who spent his childhood in Kurtulus, Istanbul and emigrated to Argentina in 1948, came to his hometown for Turkish Language Olympiads after 63 years of longing.

He told in an interview by Agos Newspaper the interesting story of how his path coincided with Mr. Fethullah Gulen whom he has never met face to face. Arzumanian donated Argentinian-Turkish Friendship Association his one hundred year old antique Turkish prayer rug, which he brought from Istanbul. The association offered to pay for this valuable historical prayer rug but Arzumanian did not accept money. Upon this, the Cultural Association sent the prayer rug to Mr. Gulen as a gift. Mr. Gulen reciprocated this courtesy by sending a watch to Arzumanian. He explained how much he values this watch, which he never puts away from his wrist: “I always wear two watches on my both wrists. One of them is my watch and the other one is Gulen’s gift. When someone asks me about these watches I tell them that my watch shows Turkey’s time.”

Hagop Arzumanian told his story to Agos Newspaper, a paper published by Armenian Community in Turkey. The interview has the title “Watch to reciprocate a prayer rug opened the path to friendship”. Arzumanian’s parents were born on Bogazliyan, Yozgat. He was born in Kurtulus, Istanbul. He lived in Istanbul until his high school years when they moved to Argentina in 1948. He says, “if you are looking for something from the past, ask those who live far from their homeland.” I still treasure the train, bus and ferry tickets of those days as a memory of Turkey. Arzumanian who feels strong friendship to Mr. Gulen comes happily to Turkey after 63 years as a guest of Turkish Language Olympiads. He has an interesting story about how was introduced to Gulen. He had a prayer rug with pictures of Ka’ba, chandeliers and a mosque. He packs the prayer rug and donates it to Argentinian-Turkish Friendship Association. Officers from the association visits him a few days later and want to pay for the rug, which is older than hundred years. Arzumanian rejects this offer. The rug is later presented to Mr. Gulen who reciprocated this valuable gift with a watch. Arzumanian expressed his feeling after receiving the watch: “Mr. Gulen, I am calling you now like a father. We immigrated here in 1948 for the reasons you know better than us. I have no complaint about Argentina but as you know no place is like your hometown. You are an extraordinary person. You are following the path of the Messenger of God. You serve the humanity through education regardless of religious and racial differences. You are enlightening our world in these dark, rainy, bad days. This is not an easy job and cannot be done without the help of God.”

He found his hometown changed a lot after 63 years. He visited his neighborhood with his friends boxer Garbis Zakaryan and doctor Aram Findik.

Source: Zaman Newspaper, August 9, 2011. This news has been translated by IDC members.