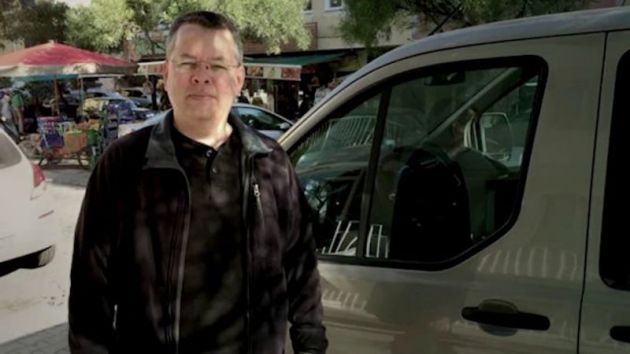 Pastor Andrew Brunson appears in a screen capture of a video from the YouTube channel of the American Center for Law and Justice.

A total of 66 U.S. senators have asked Turkish President Recep Tayyip Erdoğan to release Pastor Andrew Brunson, who is undergoing trial in Turkey on charges of espionage and links to terror groups.

In the letter to Erdoğan, the lawmakers, led by Sens. Thom Tillis and Jeanne Shaheen, stressed that they support efforts to maintain cooperation between the U.S. and Turkish law enforcement. “However, we are deeply disturbed that the Turkish government has gone beyond legitimate action against the coup plotters to undermine Turkey’s own rule of law and democratic traditions,” the letter stated.

Brunson, who has led a small church in Izmir for more than 20 years, is facing up to 15 years in prison for links with the Gulen movement and the outlawed Kurdistan Workers’ Party, and an additional 20 years for obtaining state secrets. The pastor has denied all allegations during a hearing last week. The indictment against Brunson was reportedly based on a mysterious testimony from a secret witness.

In a separate statement, Shaheen and Sen. James Lankford said that they would back efforts to sanction Turkish officials who were involved in the detainment of Brunson.

On Wednesday, U.S. President Donald Trump expressed support for Brunson by denouncing the espionage charges against him.

“Pastor Andrew Brunson, a fine gentleman and Christian leader in the United States, is on trial and being persecuted in Turkey for no reason. They call him a spy, but I am more a spy than he is. Hopefully he will be allowed to come home to his beautiful family where he belongs!” Trump said in a tweet.

Rights advocates have contended that Turkey is just using the charges against Brunson to force the U.S. to extradite Islamic cleric Fethullah Gulen, who was accused of instigating the failed July 2016 coup against Erdogan’s government.

On Saturday, Erdoğan said that the U.S. must extradite Gulen, who lives in Pennsylvania, before Brunson can be released.

“The US is behind [Gulen],” Erdogan said, according to Sputnik News. “[I]f you want Brunson, look at the steps you have taken in the past. Why don’t you deport this man in accordance with the extradition treaty?”

Meanwhile, the U.S. State Department has stated recently that it is convinced that there is no “credible evidence” to convict Brunson.

The Gulen Institute Youth Platform has announced its “Annual Essay Contest” topic for 2013: Hospitality in the Global Village. The Gulen Institute Youth Platform encourages all high school students from the U.S. and from around the world to participate the contest. The youth platform hopes that this essay will help young minds define problems related […]