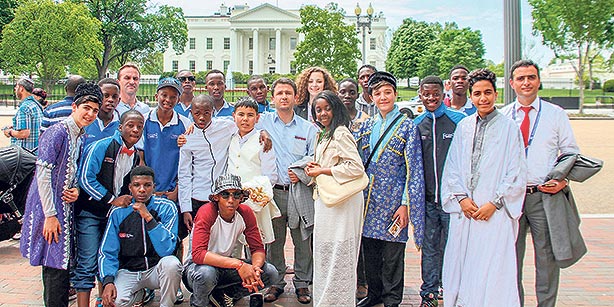 The students, participating in the 13th International Language and Culture Festival, had their photos taken in front of the White House. (Photo: Cihan)

Emre Çelik, president of Rumi Forum, a Washington-based group that is one of the co-sponsors of the event in Washington, said the White House officials wanted to brief the students about their work and that students as well as their teachers are “very excited” for the opportunity.

The students, with their traditional national attire on, made a mini performance for the White House officials during their visit.

In what could be characterized as one of the largest events held by Turkish Americans every year in the US, the International Festival of Language and Culture (IFLC) is the new form of what was popularly known as the Turkish Olympiads and is celebrated in major capitals around the world, from Manila to Cape Town.

After Turkish President Recep Tayyip Erdoğan launched a massive offensive against the Gülen movement following a corruption scandal in December of 2013, he has publicly said he will not allow the movement to hold its flagship Turkish Olympiads festivities that feature month-long activities across Turkey with students from more than a hundred countries. The ban in Turkey forced the organizers to expand their activities elsewhere and organize more than a dozen similar ceremonies in many parts of the world. The organizing committee earlier similar festivals would be held in 18 countries throughout April and May.

Kenan Zukorlich, who is responsible for a team from Serbia, has expressed his delight for the 12-day opportunity to visit and perform in Washington. He added that both the organizers and the students are pleased over how they were treated and met by the hosts.