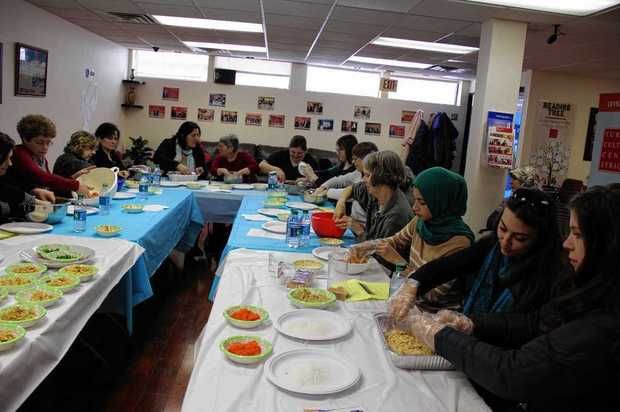 Besides organizing Turkish Day on April 23 in Syracuse, the Turkish Cultural Center in Syracuse offers cooking classes (above), educational and recreational activities for children and families. The center is located at 320 Tracy St., Syracuse. (Photo courtesy of Tim Saka)

The first Turkish Day in Syracuse will be celebrated at City Hall from noon to 1 p.m. today. Mayor Stephanie Miner will read a proclamation followed by the raising of the flags of the United States and Turkey. The Turkish national anthem will be played. Afterward, folk dances will be performed and Turkish cuisine will be served. Weather permitting, the festivities will be held on the front steps of City Hall, 223 E. Washington St. If the weather is inclement, the celebration will move inside the building.

Tim Saka, director of the local Turkish Cultural Center, is organizing the event. For the Turkish community, April 23 is an important date in Turkey’s history. In 1920, the Turkish Parliament was inaugurated. “It’s like a celebration of democracy in Turkey,” said Saka. In Turkey, the holiday is National Sovereignty Day.

It is also the day Mustafa Kemal Ataturk, the first president of the republic of Turkey, set aside as Children’s Day. Saka said Ataturk believed “democracy benefits most the children because they are the future of the country and they deserve the democracy. So he dedicated that day as a children’s festival.”

Saka said the Turkish Cultural Center in Syracuse attracts a community of about 500 that includes Turkish, Bosnian and Ahiska populations. The center organizes a yearly Friendship Dinner, food drives, coffee and baklava nights, classes and activities for children, hosts lectures and assists with the resettlement of new immigrants.