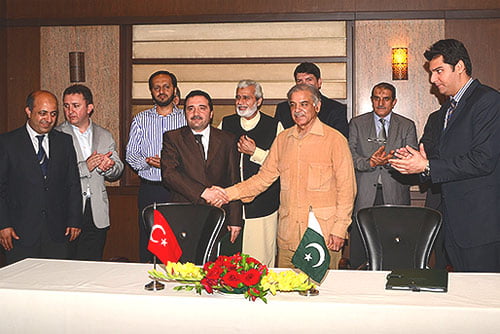 The Turkish charitable organization and NGO Kimse Yok Mu (Is Anybody There) continues to bandage wounds the world over — this time by establishing the foundations of a town in Pakistan’s Punjab state, the Cihan news agency reported on Friday.

Kimse Yok Mu has been distributing food and other humanitarian aid items in Pakistan, which was hit by major floods that affected more than 15 million people in August 2010. In an agreement with the government of the Punjab province about a year ago, the NGO was given over 40 acres of land to construct houses outside Mauza Rakh Khanpur in the district of Muzaffargarh, according to Pakistani news site DAWN.com. There are now 296 houses, a mosque and a shopping center. A handover ceremony of the new “Model Town” took place on Thursday and a protocol was signed by Kimse Yok Mu Chairman Ünal Öztürk and Mujahid Sherdil, the director general of the Provincial Disaster Management Authority.

Punjab Chief Minister Shahbaz Sharif delivered a speech at the ceremony and stated that there is an intimacy between Pakistan and Turkey. Öztürk said that we cannot forget the devoutness of the renowned poet Muhammad İkbal nor of the Pakistani people who helped fight in battle during the War of Independence in 1921.

Islamabad—A Turkish NGO, Kimse Yok Mu Solidarity and Aid Association headquartered at Istanbul, has built housing units to accommodate 296 flood-affected families in Punjab. It is a grand brotherly gesture from the Turkish people towards alleviating the housing difficulties of the flood affectees of Pakistan. Today, Sep. 13, 2013, in the inauguration ceremony of this […]