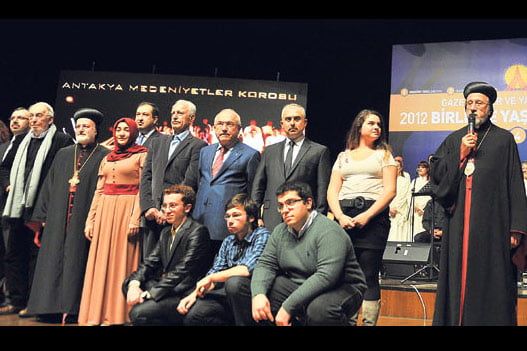 Putting aside all their prejudices and what their course books taught them, a group of students from a Turkish high school and an Armenian high school have joined hands to get to know each other and develop bonds of brotherhood among different religious and ethnic groups in the country with a joint project, which has resulted in a prominent award from the Journalists and Writers Foundation (GYV).

Students from the Mümtaz Turhan Social Sciences School and the Private Getronagan Armenian High School were last Sunday granted the Exemplary Behavior and/or Initiatives in the Public Sphere Award by the GYV at a spectacular award ceremony held at the İstanbul Congress Center for their outstanding project called “Aşure/Anuşabur.”

The group of Turkish and Armenian students launched the project that saw them travel across Turkey to meet other cultures and see if they could help foster a more peaceful coexistence between different groups in the country.

Hanne Betül Bolluk, an 11th grader at the Mümtaz Turhan Social Sciences School, told Sunday’s Zaman that she and her friends decided to do something to better know Armenians who have been living in Anatolia for years after Fethiye Çetin, a lawyer who is affiliated with the Armenian community in Turkey, came to their school last year for a talk to introduce her book.

She said they contacted the Agos newspaper, an Armenian daily published in Turkey, to discuss what they can do and came up with the idea of meeting a group of students from an Armenian school, which ended up being the Private Getronagan Armenian High School in İstanbul’s Karaköy neighborhood.

“Personally, I was like the living example of the official ideology taught at schools. But my friends and I put everything aside because we knew that counting the number of people [who died in the 1915 incidents — both Turks and Armenians] would not bring any good. We just came together to understand each other’s pain,” Bolluk said.

Most Turks and Armenians are in disagreement over the definition of the incidents that took place in 1915 when the Ottoman Empire was about to collapse. Armenians claim that their ancestors were subjected to genocide as they were deported from the country in severe winter conditions, while Turkey categorically rejects the accusations, saying that both Turks and Armenians were killed in the conflict. Turkey and Armenia also have no diplomatic relations.

Bolluk said they launched the “Aşure/Anuşabur” project with their new Armenian friends after doing a considerable amount of research on the history and culture of Armenians and exchanging views with academics and they presented their project at a conference held at their school last May.

The conference, which attracted more than 200 people, included everything about Armenians, introducing their music, folklore, cuisine and history and was also attended by academics.

It was this conference which brought the students’ efforts to promote a peaceful coexistence to the attention of the GYV.

With regards to the name of the project, which means “Noah’s Pudding” in Turkish and Armenian, Bolluk said the name has a metaphoric meeting as every ingredient in Noah’s pudding keeps its taste but it mingles with other ingredients to give a unique taste just like the people of different backgrounds living peacefully in a country.

Linda Serkizyan, one of the students at the Armenian school, said she was very surprised about the amount of knowledge her Turkish friends had about the Armenian community when she first met them.

She said she not only became very good friends with the students at the Turkish school but got rid of her prejudices toward headscarved women.

Most of the Turkish students in the project wear headscarves.

“I used to believe that women wearing headscarves were also covering their minds, but after meeting these friends, I noticed that they are very open-minded people,” Terziyan told Sunday’s Zaman.

Rumeysa Şahbaz, another Turkish student in the project, said she also learned some Armenian expressions and she is so good at pronouncing them that even Armenians get surprised over how well she is able to pronounce Armenian words.

Zeynep Yıldız, one of the other students in the project, noted that she believes if only one person in a family gets in touch with people from another culture and religion and develops a relationship with them, this will lead to a domino effect and change the views or prejudices toward a certain ethnic or religious community of the people in that person’s entire family.

“As we learn about certain things, we feel responsibility on our shoulders to also let others know this,” Yıldız said.

The students have established the coexistence platform at their school under which they will carry out further work to bring the various communities in the country together. Under the umbrella of the platform, they have launched separate projects targeting different religious and ethnic groups in the country such as the Syriacs, Alevis, Kurds and Circassians, in addition to the Greeks and the Armenians.

Talking about their future projects, Bolluk said they plan to organize a modern arts gallery in December that will tell the stories of the sufferings of Armenians and publish a book about the stories of the mothers of members of the terrorist Kurdistan Workers’ Party (PKK) as well as those of Turkish soldiers.

She said she, along with her two friends, Şahbaz and Yıldız, traveled to the southeastern province of Diyarbakır over the summer, stayed there for 10 days and came out with very heartbreaking stories which will be the topic of their book.