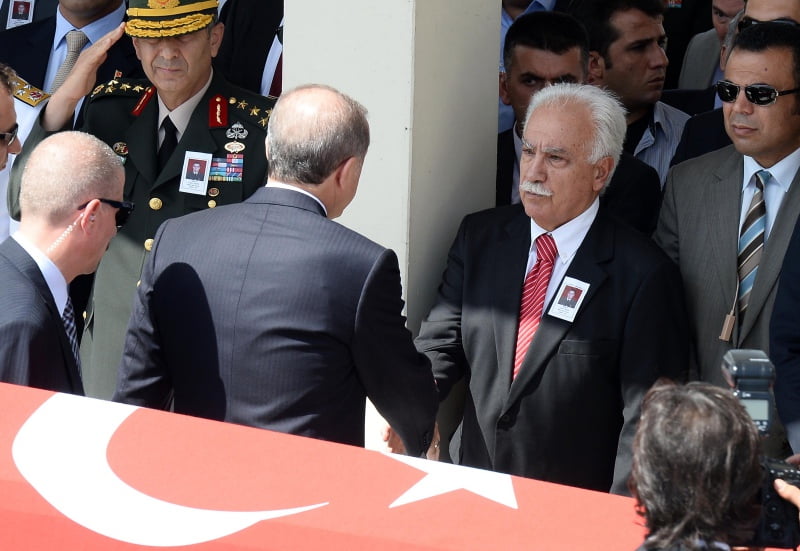 Erdogan shoke hands with Dogu Perincek - a controversial Turkish politician who has allegedly massive networks in Turkish judiciary and military, during a martyr funeral.

1,899 people voted in poll that Dr. Akyuz claims enough to represent to be able to make comments on the results. Dr. Akyuz asked this question:

Here is Dr. Akyuz’s his own analysis of the poll.

“The poll results about the 15 July coup have just arrived. I’m going to interpret this one-question poll. Of course, two minds are better than one, therefore I look forward to your valuable comments.

“For polls to accurately represent a target audience, it is important for there to be a high level of participation from the target audience. In this regard, while the number of participants is high enough, it should be put into consideration that I do not have many AKP-supporter followers. However, apart from AKP-supporters, I have enough followers from every segment of society. It’s not that I don’t have many AKP-supporter followers because I try to exclude them, rather it is because they can’t stand my content.

However, I did not want to measure the opinions of AKP-supporters, whose only opinions come from the regime-controlled mainstream Turkish media anyway; I wanted to see what the opposition supporters think.  Therefore, I could say my sampling in this poll is pretty reliable.

In my opinion, even more important than the distribution of the results of my poll is that the poll asked about the “bloody conspiracy of July 15” and not one person commented saying “that was a coup, not a conspiracy.” Therefore, it could be said that all of the participants agree that “it was a conspiracy.”

Despite the fact that they knew Erdogan ruled Turkey by himself, even before July 15, the option that only had Erdogan’s name was chosen by 25% while his name with Perinçek’s was chosen by 64%. Very intriguing…

It’s intriguing because the opposition, which gives an impression of feeling immense hatred towards Erdogan, instead of choosing the first correct-sounding answer on the poll (which usually has a higher chance of being clicked on by poll participants) instead chose the last option of “RTE and Perinçek” together, showing they were clicking on their answer consciously.

This means: Erdogan may politically be, both in terms of party and country leadership, a strong one-man ruler. But even he couldn’t have devise this bloody plot alone. With the support of Perinçek and his followers (including the Russian factor), this bloody conspiracy has been made! This is what the poll results show by a great percentage.

Of course the same is true in terms of Dogu Perinçek. Perinçek’s name alone was selected by only 3%. You’ve all probably heard the following before: “Who the heck is Perinçek, he only has a tiny percentage of people’s votes in elections, stop exaggerating his influence.” Therefore the poll participants don’t think he alone could have devised July 15.

But when his name is next to Erdogan’s name, the belief that he conspired with Erdogan to plot July 15 is at 64%. So people are saying, he is nothing on his own, but in terms of the balance of powers, he could be “deadly combo” with Erdogan.

As for the “Hizmet Movement” option on the poll. Despite the fact that Erdogan and Turkish media have pointed at Hizmet as the sole and undisputed perpetrator of July 15, only 8% have chosen it. Which means:

Despite the fact that the hizmet movement received harsh criticisms (sometimes to the level of hatred) from all sects of Turkish society for allegedly being in “cooperation, alliance” etc. with AKP until the December 17-25 graft operations, the Turkish regime was not able to convince the opposition that it was behind July 15.

While this is good news on the one hand for the Hizmet Movement in terms of convincing people of their innocence, it also means that Erdogan and Perincek, who can’t be convincing, will become more atrocious towards the movement.

Fake news, such as the assassination of Sümeyye (Erdogan’s daughter) by the movement and the assassination of Russian Ambassador Karlov, will continue to be published because they have no other chance! They have no chance but produce fake news. Pro-Erdogan media has no buyer among the opposition but it is doing it job to manipulate Erdogan-supporters’ perseption.

In result, July 15th coup attempt may be  strongly regarded by the opposition as Erdogan and Perincek’s conspiracy! This is, of course, despite the opposition’s suspicion, resentment, and sometimes even hatred, towards the Hizmet Movement.”