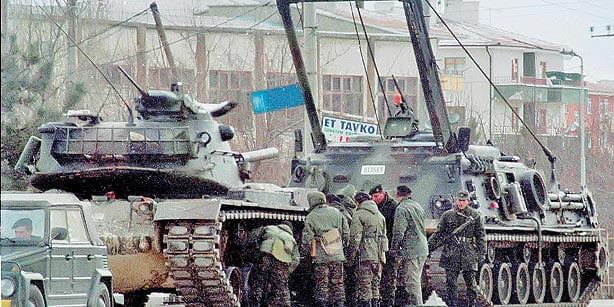 ANKARA
Prime minister Recep Tayyip Erdoğan, who has recently accused the faith-based Hizmet movement inspired by Turkish Islamic scholar Fethullah Gülen of cooperating with coup perpetrators during the Feb. 28, 1997 post-modern coup era, defended the same movement at a parliamentary coup commission in 2012, when he said the movement’s followers had been victimized during the coup.

Erdoğan, who is currently putting intense pressure on the judiciary in a bid to bury the biggest bribery and corruption investigation in the history of the Turkish Republic, continues to direct baseless accusations at the Hizmet movement in order to distract the public from the realities in the country. Nowadays, he has been contradicting earlier remarks on the movement’s role during the Feb. 28 coup era. The prime minister has recently been claiming at his party’s rallies that the Hizmet movement cooperated with coup perpetrators during the Feb. 28 era, and in so doing “betrayed the national will.” However, the same prime minister once called the Hizmet movement — though he didn’t mention it by name — “the victim of Feb. 28” in a letter he sent to the parliamentary Coup and Memorandum Investigation Commission in November of 2012.

“Evaluations that present the social groups that were victimized in that period [Feb. 28 coup era] as collaborators or supporters of those with interventionist mindsets [coup makers] would be very ruthless and unrealistic,” the letter said.

The quotation came under the heading, “The plan to destroy Justice and Development Party (AK Party) and the Gülen movement.” The Milliyet daily reported Erdoğan’s remarks in a story headline“They [Hizmet movement] became victims of Feb. 28 process,” accompanied by a picture of Gülen. The Radikal daily reported the prime minister’s letter under the headline, “Gülen was also victimized.”

In 2012, the parliamentary Coup and Memorandum Investigation Commission asked Erdoğan to testify as one of the victims of the Feb. 28 coup period. The commission asked Erdoğan a total of 50 questions. One of those questions was, “Fethullah Gülen had supported the Feb. 28 coup by stating ‘the soldiers used their constitutional right’ and ‘the soldiers are well-intentioned’ during that period. During the same period, the Zaman daily published the headline, ‘Good luck with it.’ How do you evaluate such explanations?”

Erdoğan responded to the questions with a 29-page letter to the commission on Nov. 26, 2012. In addition to the quotation above, Erdoğan stated: “The statements that were voiced by the groups, communities and opinion leaders, who allocate all their facilities and time to remedy the social problems of our country and conduct moral activities, with the motivation of protecting people and with the sense of responsibility, absolutely cannot be stigmatized as a part of the Feb. 28 process. As a matter of fact, those groups became victims of the process [coup era] not only with the unjust treatment they faced but also with the judicial proceedings launched against them.”

Erdoğan went on to state: “As it is well known, not only the government but also various parts of the society are seen as targets and made to be passive during the coup periods.Those groups are shown as a threat by coup perpetrators. This causes discrimination against those groups in the public, which victimizes the groups. In particular, during the Feb. 28 coup period, social groups from the business world to politics and to civil society were exposed to clear persecution.”

Introducing himself as a protector of those social groups who were victimized during the Feb. 28 coup, Erdoğan stated that the democratization attempts conducted by the Justice and Development Party (AK Party) aimed, to some extent, to eliminate the injustices directed at people during Feb. 28. He went on to state: “The vocational high schools, imam hatip high schools and Quran courses were victimized during that period and the government tried to resolve those victimizations with some recent steps. By doing this, the government made normalization possible in social life.”

The prime minister’s chief adviser, Yalçın Akdoğan, had used remarks similar to Erdoğan’s words in his column “Darbe mağdurlarına ithamlar” (accusations for coup victims) published in the Star daily on Nov. 27, 2012. He stated, “The AK Party is a product of Feb. 28,” in his column, adding: “Those parties that could not pass the tests during the coup periods resort to manipulations and distortions during this face-off period [when Turkey is facing its Feb. 28 history]. Those parties, which cannot criticize their own stance and attitude during the coup periods, are trying to put the groups victimized during coups [apparently referring to Hizmet movement] under suspicion and are trying to create questions in people’s minds about the AK Party, which is currently facing all the coups.”

Akdoğan further stated in his column that there were two points that disturbed him; the first was the fact that former President Turgut Özal was defined as a “coup maker” and the second was that esteemed Fethullah Gülen was claimed to have supported the Feb. 28 post-modern coup. Highlighting that such a claim could not be accepted in his column, Akdoğan went on to state: “The other person that such claims cannot be associated with is Fethullah Gülen. One CHP [Republican People’s Party] deputy claimed that the AK Party benefited from the Feb. 28 coup and April 27, 2007 military memorandum and further claimed that Fethullah Gülen supported the Feb. 28 process. Claiming such a thing based on Gülen’s words and headlines published in Zaman daily doesn’t comply with justice and reality. Showing the groups and actors who became the victims of the process as the cooperators of the process itself is a slander. Labeling a person [Gülen], who faced a judicial proceeding and was forced to flee abroad, is nothing more than delirious. Actually, those who have a sense of responsibility take action not by thinking of their own profits but by thinking of their followers’ benefits. Considering this as a concession or support is very wrong. …The AK Party and those who struggled with it against coup makers and those with tutelage understanding will be passed into history.”

Both Prime Minister Erdoğan and his advisor Akdoğan have apparently forgotten their own words they voiced just two years ago. Erdoğan has now been directing claims that are harsher and more serious than those that were voiced by the main opposition CHP in 2012, in his speeches in Parliament.

Speaking during his party’s parliamentary group meeting on Tuesday, Erdoğan claimed that the CHP is being administrated by the Hizmet movement, adding that the Turkish nation will never forget the “cooperative attitude” of the movement during the Feb. 28 post-modern coup.

A coalition government led by a now-defunct conservative party, Welfare Party (RP), was forced by the military to step down on Feb. 28, 1997. Not only were fatal blows dealt to fundamental rights and freedoms after the coup, but democracy and the rule of law were also suspended. The coup introduced a series of harsh restrictions on religious life, with an unofficial but widely practiced ban on the use of the Islamic headscarf at public institutions and universities.