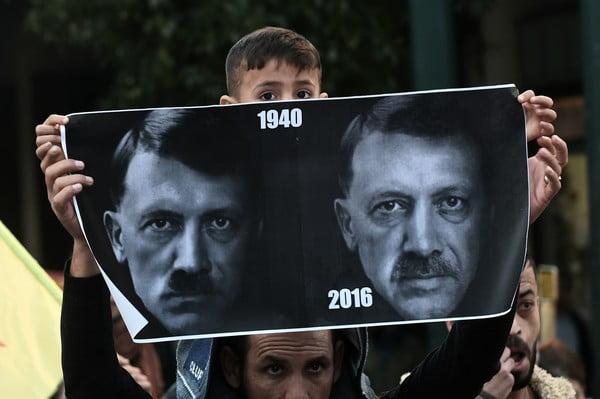 Turkish democracy developed too rapidly in the early years of this century,” says a Bangkok-based technology expert from Istanbul, who wishes to be known only as Erdem, as he is one of thousands of expat Turks around the world denied their civil rights by the autocratic regime of President Recep Erdogan.

“Elections were held. The media was independent. Corruption became less and less. People had to behave.”

After coming to power in 2002, Erdogan’s populist regime brought a measure of much-craved sociopolitical stability to the almost entirely Muslim country. But too good to be true, populist rule has given way to growing corruption in a system lacking mature mechanisms for monitoring accumulation of power. An enthusiastic supporter of Muslim cleric Fethullah Gulen’s Hizmet (“Service”) movement, which funds a large network of schools in Turkey, Erdem lauds its founder for standing up to the power gorging now infecting the ruling AK Parti (AKP). “After the 2010 election, Erdogan and the AKP failed to politicise the Gulen movement, a civilian Islamic phenomenon,” he says.

Power-hungry forces within the AKP reached out to Gulen, intent on tapping this source of mass political support. When the tactic failed, Gulen supporters came to be seen as enemies of the state. “The Turkish government is targeting people they even just suspect of having connections with the Gulen movement. They have lists. In the history of Turkey, there’s been no party like the AKP. This is the most dangerous phase in history of the Turkish republic.

Multiple accusations of graft among AKP higher-ups are exemplified by the case of Reza Zarrab, an incarcerated former gold trader and associate of Erdogan who recently gave evidence before a US court that Turkey’s president is corrupt.

The AKP’s one-time secular rival for hearts and minds, the Republican People’s Party, had a similar strategy to woo Islamic institutions, says Erdem, although with the opposite intention of muting the appeal of political Islam. “The Kemalists hate the AKP more than they hate civilian Islam,” he says of the supporters inspired by the legacy of modern Turkey’s founder and first president, Mustafa Kemal Ataturk.

In the absence of electoral success, secular elements turned to direct military intervention, a pattern that has plagued the Turkish republic throughout its century of existence. When an attempted military coup ended in bloody failure in the summer of 2016, the AKP pounced on the opportunity to cement their power. As part of the crackdown, Ankara cancelled around 50,000 passports to prevent dissidents leaving the country, a move that saw Interpol halt cooperation with Ankara over suspicion that political retribution was taking place.

With AKP power swelling, late last year the Turkish president invoked the legacy of Ataturk, or “father Turk”, who forged a modern nation-state and rule of law from the remnants of the Ottoman Empire.

Yet while Ataturk laudably focused on establishing a system minimising corruption and setting up a democracy, the AKP’s tactics more resemble the increasingly fake democracy of Hun Sen’s Cambodia, marked by an atmosphere of fear used to target the opposition, civil society groups and media freedoms.

Friends and colleagues of Erdem in Malaysia, Myanmar and Pakistan have had their lives turned upside down. A call from a Yangon Airport Immigration official to a Turkish diplomat led to the detainment and forcible return to Turkey of someone Erdem calls “a good man who loved his family and supported Gulen”. In Pakistan, a Turkish citizen was kidnapped from his home by a dozen masked men and forcibly returned to a homeland, of which he has “inside knowledge, according to Erdem.

Closer to home, a Turkish colleague had this to say about a heart-wrenching departure: “It’s very difficult to say that I had to leave Thailand. I have been living with this beautiful country’s great people for six years. I love Thailand, I love Thai people; my life’s greatest times were in Thailand. But due to Turkish Embassies’ actions against their own citizens all over the world, including Thailand, I had to leave Thailand with my husband. I was crying at the airport due to my feelings towards this country. I don’t want to separate from my friends. Sorry not to say goodbye to you because this was the urgent case. I will never lose my hope that these hard days will pass over.”

In a Bangkok café, as his three children sample board games, Erdem details how public servants of a latter-day sultan pressured his family as well, while stopping short of personally blaming Erdogan for Turkey’s current woes, saying, “You cannot know his heart.

“There was a document from the Turkish embassy that I needed in order to work here. My friends told me, ‘Don’t give them your passport.’ But an embassy official still told me, ‘You need to go back to Turkey.’ Then he cleared his throat and said with a straight face, ‘Your passport has been cancelled. You will be issued only once you return to Turkey.’ When I asked him why, he just said ‘I don’t know. Only in Turkey can these decisions be made.”

The attempted coup was to an extent an “inside job”, says Erdem, enabling AKP elements to flush out rivals. The ensuing state of emergency has since been extended six times by an elected dictatorship that finds it increasingly difficult to cloak itself in the image of Islamic justice and anti-corruption that brought the party to power.

“Erdogan made a rule that you cannot be president more than twice, then broke his own rule,” says Erdem.

He hopes that common sense and the Turkish Republic’s founding ideals will eventually override the extremism whose tentacles are now stretching across the world to snatch Turks from homes overseas.