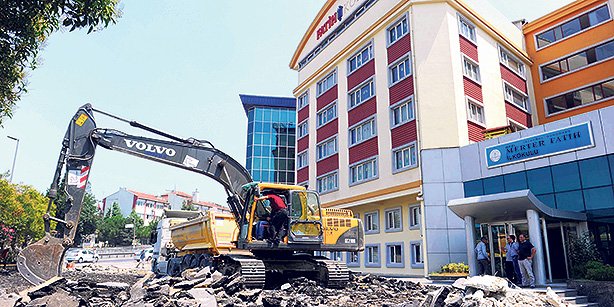 According to the Cihan news agency, Fatih College officials said the demolition is unlawful, noting that the case regarding the decision to construct a road through the college courtyard is still ongoing.

Fatih College has been in its location for 20 years but the municipality, controlled by the Justice and Development Party (AK Party), decided in October 2014 to construct a road through the college courtyard.

One of the school walls as well as the security guard’s office in the courtyard were demolished by teams from the municipality around midnight on Oct. 6, 2014 and during Eid al-Adha — an official holiday in Turkey. Sources had said the municipality did not send any written warning beforehand to the school administration about the demolition plans.

Parents of students at Fatih College gathered in front of city hall on Oct. 8 to protest the plan to construct a road through the college courtyard.

The head of the parent-teacher association, Nezihe Ehli, previously stated that schools are where the next generation is shaped and must therefore be protected. Ehli also noted that Fatih College’s Merter campus had outstanding successes between 2005 and 2014, grooming champions in high school entry exams, national and international scientific, sports and cultural Olympiads and many awards from the Scientific and Technological Research Council of Turkey (TÜBİTAK).

Fatih College is among the schools sympathetic to the Gülen movement, also known as the Hizmet movement and inspired by the ideas of Turkish Islamic scholar Fethullah Gülen. The movement, together with Gülen, has been targeted by President Recep Tayyip Erdoğan ever since a corruption probe went public on Dec. 17, 2013, implicating senior members of the government.

Erdoğan accuses the movement of being behind the corruption operation and of being a criminal network seeking to overthrow the ruling party government. The movement strongly denies the claims.