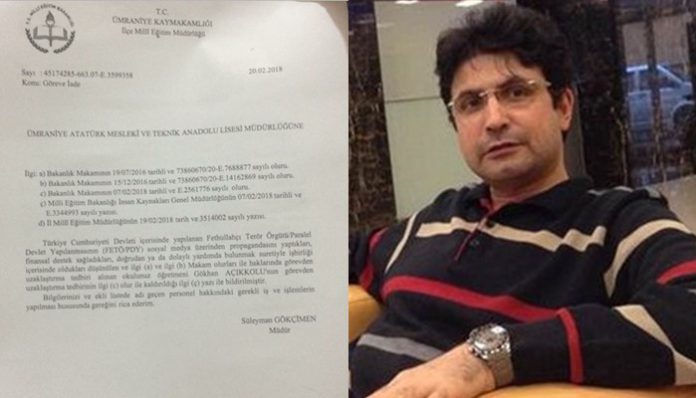 The Justice and Development Party (AKP) government led by President Recep Tayyip Erdoğan has finally announced the innocence of the deceased teacher.

The reinstatement decision, numbered E.2561776, was made by the Education Ministry on Feb. 7, 2018. The official document for Açıkkollu’s reinstatement was delivered by the principal of his former school to Açıkkollu’s wife, who had also been dismissed from her job as a teacher by a government decree issued under the state of emergency declared in the aftermath of the failed coup. Thus, Açıkkollu’s honor was restored with a simple “pardon” one-and-a-half years after his death.

Açıkkollu was detained on July 24, 2016 on trumped-up charges of coup plotting and terrorism and remained in police custody for 13 days, during which time he was subjected to both physical and psychological torture. He was never officially interrogated, and the police did not even take a statement from him. Instead, he was taken from his cell every day to face torture and rushed to the hospital when his condition deteriorated, only to be shipped back to detention. He told doctors about the abuse and torture; yet, in some cases his statements were not even registered in medical reports, and evidence of physical abuse was covered up under pressure from the police.

Açıkkollu was beaten, slapped in the face, kicked in the rib cage, kneed in the back and his head banged against a wall. His medical check-up before he was put in detention showed no signs of any heart troubles; yet, he was pronounced dead due to heart failure. When he collapsed in his cell, emergency services were belatedly called and he died in detention, although official records were doctored to indicate that he expired at the hospital.

Prof. Dr. Şebnem Korur Fincancı, president of the Human Rights Foundation of Turkey (TİHV), said in a report that Açıkkollu had died from a heart attack stemming from the torture to which he was subjected.

Açıkkollu’s family learned of his death when they were called to the İstanbul Institute of Forensic Medicine, where Açıkkollu’s ill treatment continued even in death. They were told the funeral could be held on condition that he would be buried in a graveyard set aside by the Greater İstanbul Municipality for alleged “traitors,” despite the fact he had not been tried, nor even interrogated. Imams assigned by the Religious Affairs Directorate (Diyanet) had refused to conduct the funeral prayer for Açıkkollu.

His family had to embalm the body themselves and took him to his hometown in Konya province in their own car. Here, too, the imam of the local mosque would not officiate at the funeral because of instructions issued by the Religious Affairs Directorate that “the funeral prayer will not be performed for traitors.” As a result, his last rites were said by his close relatives.

The torture, ill-treatment, abusive, inhuman and degrading treatment of people who are deprived of their liberties in Turkey’s detention centers and prisons have become the norm rather than an exception under increased nationalistic euphoria and religious zealotry in the country in wake of the coup attempt in July 2016, blamed by the government on the Gülen movement.

Turkey has suspended or dismissed more than 150,000 judges, teachers, police and other civil servants since the putsch. Turkey’s interior minister announced on Dec. 12, 2017 that 55,665 people have been arrested. The Justice Ministry announced a day later that 169,013 people have been the subject of legal proceedings on coup charges since the failed coup.

A total of 48,305 people were arrested by courts across Turkey in 2017 over their alleged links to the Gülen movement, said Turkish Interior Minister Süleyman Soylu on Dec. 2, 2018.

“The number of detentions is nearly three times higher,” Soylu told a security meeting in İstanbul and claimed that “even these figures are not enough to reveal the severity of the issue.”