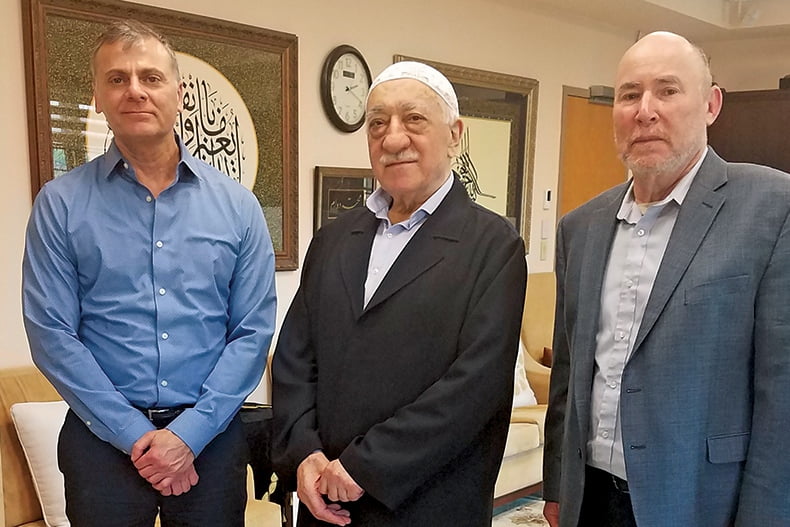 Jews, I believe, are obliged to speak up for those who suffer because they are falsely accused of being part of a Jewish conspiracy, thus becoming fellow victims of anti-Semitism.

That is the situation of tens of thousands of Turkish Muslims, who, for the past two years, have been persecuted, branded among other things as Mossad agents, “Zionists” (a pejorative term in Turkey), and tools of Israel.

The tragic plight of these people continues unabated, and sadly largely unnoticed, with some 150,000 thrown out of work; 130,000 detained, arrested or tortured; and 2,000 schools, universities and dormitories; 184 media outlets; and 950 companies, worth $11 billion in assets, seized or shuttered. An entire echelon of Turkey’s best and brightest educators, journalists, judges, doctors, lawyers, and other professionals have been banned. Families have been separated.

This persecution followed events of July 15-16, 2016, which many impartial analysts have called  a dubious coup attempt. Turkey’s President Recep Tayyip Erdogan used the coup as a pretense to crush Fethullah Gulen and the Hizmet (Service) movement he inspired, in what devotees call “our Reichstag Fire and Kristallnacht rolled into one.”

Gulen, a Sufi-inspired Sunni teacher living in exile in Pennsylvania, ran afoul of Erdogan’s efforts to advance his dictatorial ambitions; after several years of escalating tensions, Erdogan blamed Gulen for the alleged coup and subsequently purged everyone and everything associated with Hizmet.

What made Gulen such a threat? During the past 30 years he has stimulated a global network of schools specializing in STEM (including, for example, the Chicago Math and Science Academy), universities, humanitarian and social welfare organizations, and media outlets  serving people of all faiths and ethnicities. His teaching emphasizes the compatibility of religion and modernity, and stresses the goal of human understanding and harmony through dialog and outreach across religious and cultural divides.

Gulen’s critics have said these institutions and their backers wielded too much power, especially in the days when Gulenists supported Erdogan’s efforts to moderate Turkey’s militant secularism, to better accommodate faith in the public square. But Hizmet supporters, who focused on public service and fostering civil society organizations, called out Erdogan’s growing corruption and creeping authoritarianism. As Erdogan increasingly played the Islamist, and virulently anti-Israel, card, Gulen and his adherents stuck to their largely apolitical agenda of advancing educational opportunities, opening hospitals and charities, reaching out to non-Muslims, and opening Turkey to the world.

Jews, I believe, are obliged to speak up for those who suffer because they are falsely accused of being part of a Jewish conspiracy, thus becoming fellow victims of anti-Semitism.

The breech between Erdogan and Gulen-who opposes political Islam-surfaced in 2010 during the infamous Gaza Flotilla affair. Erdogan, who was beating the drums against Israel to whip up support among pro-Palestinian Turks and Muslims worldwide, endorsed a Hamas/Muslim Brotherhood stunt. Nine Turks died attacking Israeli forces who intercepted and boarded the Turkish vessel Mavi Marmara, which was attempting to break Israel’s naval blockade of Gaza.

Enraging Erdogan, Gulen criticized the flotilla for sailing without Israel’s consent. Their relationship further deteriorated over the years, as the Turkish president increasingly saw Hizmet as a rival and a threat to his ambitions, arresting Hizmet associated journalists, judges and others in 2013.

Labeled a Zionist and secret Jew for his opposition to Erdogan and openness to Jews and the Jewish state, Gulen’s status has been a barometer for the situation of Turkey’s Jewish community. For nearly a decade, Turkish Jews have faced an uptick in anti-Semitic rhetoric and acts, and thousands have left, as Erdogan rallies Turks behind his authoritarian agenda by scapegoating Jews and other minorities, and especially Hizmet.

As one who has spoken with Gulen and for 10 years has interacted with Hizmet, befriending many, I feel compelled to speak up for them. They are admirably committed to giving back to society; to them civic service for the benefit of all people, is an act of faith. Devout Muslims, they see every human being created in the image of God, demonize no one, are warm and caring and astoundingly non-judgmental. These are not my sweeping generalizations, but rather what I have come to see as their most closely-held values.

Today they are blacklisted, imprisoned, some tortured, and many are living in exile with no possibility of return to their beloved Turkey – a nation they only sought to improve. Their plight provides a terrifying example of what can happen to loving, law-abiding, educated people who dare to practice what they preach in the face of a rising tyrant.

When Muslims of good conscience are demonized and persecuted in part because they embrace me as a Jew (though in reality they embrace me because I am a fellow human), I must speak on their behalf. To remain silent is to be complicit in their suffering.

Aaron B. Cohen is Senior Communications Advisor of the Jewish United Fund of Metropolitan Chicago.