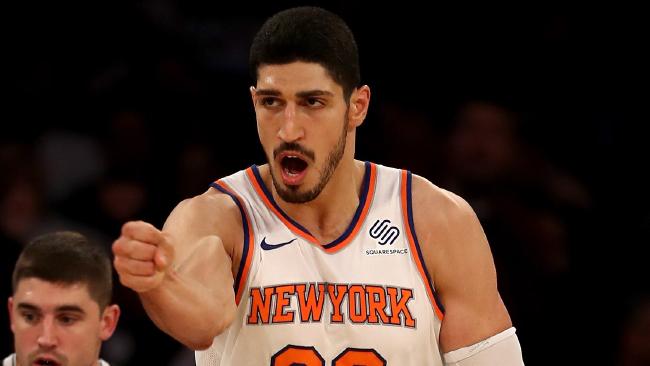 Enes Kanter is not only the top earning Turkish professional basketball player but also the most expensive sports transfer in Turkish history. He plays  for the New York Knicks of the National Basketball Association (NBA).

Kanter wrote on the Players’ Tribune earlier this year “You guys need to know what is going on in Turkey right now,”, after his airport scare. “I hope people around the world will open their eyes to the human rights abuses. Things have gotten very bad over the last year. This is not my opinion. We don’t know everything that is happening inside Turkey, but we do know some facts. Newspapers and media have been restricted. Academics have been fired. Peaceful protesting is not allowed. Many people have been imprisoned without any real charges. There are reports of torture and rape and worse.”

He is well known for his athletic success as well as his fight with Turkey’s president for basic human rights and democracy .

PPJ invited Enes Kanter for a talk on what is all his fight about .

PPJ: You are ranked as the most expensive sports transfer and the highest-paid athlete of all of the times in Turkish history and haven’t got called up to national basketball team at your best. The National team coach said a few years ago that “Enes represents his country in a best way in the NBA, but although called to the national team squad he hasn’t turned up in the last two years. He had a knee operation before the world championship and could not come up the national team. He still has not ask for apology for the incidents” referring to the political argument between him and the president. Do you believe that your political views have an impact on your sports career?

Kanter: Most definitely — it is clear that my political position has affected my standing with the national team. In fact, in many Turkish newspaper there is no mention of me in the sports section ever — however if another Turkish player does something there is a large amount of praise. Many papers know if they speak of me their newspapers may get shut down or penalized. I have accepted this fact. It is a shame, because I wish I could represent Turkey and help our team win games

PPJ: Now we know Turkish prosecutors plan to request for you a 4 year prison sentence for insulting the President due to your criticism. What is your take on both on?

Kanter: This is something I expected. Honestly, I thought they would request more years because other citizens get a larger sentence. This is the sad reality in Turkey now. If you criticize the government you will be jailed — this puts even moderate opposition in a bad position because people won’t point out any injustices that are happening.

PPJ: In May, you were detained at a Romanian airport after being informed of the cancellation of your Turkish passport. Why was that? Do you think that the Turkish gov’t is taking measure to impose pressure against critical figures also out of Turkey and do you feel safe outside Turkey?

Kanter: Yes. They have already extradited many people outside Turkey and even hired law firms to find ways to extradite people from America and countries with strong and respected court systems. They canceled my passport because they assumed if it was cancelled I would be deported back to Turkey. Thankfully, the US officials helped me and I was able to make it safely back to the US.

PPJ: A brief google search prior to this interview showed that pro gov’t media has produce lots of materIal against you. Why do you think the mainstream media is against you and even sports media refrain mentioning your name on their reports?

Kanter: The material produced against me is me criticizing the government arresting women and children and abducting people. I don’t deny saying this. This is clear evidence which you can find from Human Rights Watch and other reputable organizations. There is only one type of media — media run by Erdogan and his allies. If you do some research you will find around a 100 media companies and news organizations have been shut down (this was the opposition or unbiased news) so the only media you get right now is media that is controlled by the government — similar to some communist countries.

PPJ: Now it is said that you would be tried in absentia regarding tweets you posted about Erdogan in May and June 2016. Are you afraid of the incoming judicial process, do you feel secure in terms of guarantees? Do you think this is a message to political opposition figures in general?

Kanter: I think the decision about what will happen to me in Turkey was made long time ago, before even announcing they will try me. The court system is more like a circus. They are pretending to have the rule of law while in reality things are predetermined. I am not worried because I am in America and intelligent people know what is happening in Turkey.

PPJ: You are being called a terrorist by Turkish government. What is your opinion on the widespread use of this term by the Government?

Kanter: This is a term that many governments are using to scare people and get public support. No one likes terrorists — so if you brand your opponents as terrorists it’s easy to get support. Some people are bad people and deserve this term. But I am an NBA player who works in the community and helps my team and friends. The Turkish government has even accused the US of being terrorist sponsors, they are a joke now.

It is well known that the institute is inspired by the peaceful teachings of Fethullah Gülen, whose decades-long commitment to education, altruistic community service, and interfaith harmony has inspired millions around the world. Gülen has reinterpreted aspects of Islamic tradition to meet the needs of contemporary Muslims.