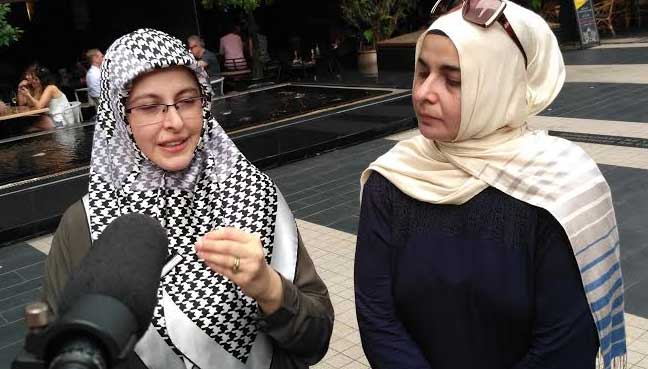 The wives of two Turkish men arrested by police over suspected terrorist activities are demanding the authorities immediately release their husbands.

This follows a report last Thursday which quoted Deputy Prime Minister and Home Minister Ahmad Zahid Hamidi as claiming that the two Turkish citizens, arrested a few days ago, were suspected of having links to the IS.

Zahid said the duo were detained after surveillance conducted by the police’s Special Branch anti-terrorism division on a group of individuals.

Speaking to reporters, Ayse said it was “completely unacceptable” that the Malaysian government would accuse her husband of such a thing.

“Even if they accuse him for other things it would still be acceptable but they’ve accused him of an unreasonable and terrible thing like being involved with murderers,” she said with tears in her eyes.

“I’ve lived here with my husband for 15 years. Malaysia is not my second home, it is my home because all my babies were born here. All I can say is shame on the Malaysian government.”

She claimed the last thing her husband would be involved in was terrorism as it went against his principles and beliefs.

“My husband is loving, caring and patient. He believes that everyone, no matter what colour their skin or what their religion, can live in peace with one another. I don’t have to say my husband is not guilty because he is not!”

Hatice echoed the same sentiments about her own husband, saying the police could not prove her husband was guilty of any crime.

“We believe IS is a terrorist organisation and we are against them. We also believe like it says in the Quran that ‘killing one man is akin to killing the whole of humanity’,” she said.

“We are sure the Malaysian government is making a huge mistake and I’m sure it will be corrected soon as there is no proof against our husbands.

“We have not hurt a fly, how can you say our husbands are (linked to the) IS?”

Just as distraught was Ainnurul Aisyah Yunos Ali Maricar, the wife of Ihsan Aslan, yet another Turkish man arrested in the country, who told reporters at a press conference on Wednesday that like Ayse, she too initially feared her husband had been kidnapped.

Ayse told reporters today however that after Wednesday’s press conference, she received a call from a police inspector informing her that her husband had been arrested.

“The inspector was very nice to me and told me not to worry.

“Moments later, my husband called me and said he was coming to get his passport.

“When he arrived with police officers outside, the police officers were trying to hide him and I had to tell them that the passport was with the lawyer. That was the last time I saw my husband, I did not even get the chance to speak to him.”

Yesterday The Star reported that Ozcelik was detained around 5.30pm on Thursday while travelling in a car with his son Suheyl and another unidentified individual.

However according to news portal Turkish Minute, Ozcelik, a Turkish academic, carries an UNHCR refugee card.

On Tuesday, police arrested Karaman and Aslan. Zahid said yesterday that the two were allegedly involved in spreading the influence of IS and collecting funds for the militant group.

The Star report said Ozcelik was supposed to stand trial on May 3 and 4 for allegedly obstructing civil servants from carrying out their duties. However, the trial was postponed to May 19 for case management following Karaman’s absence as a witness.

Suheyl and Karaman were supposed to meet with their lawyers but Karaman never showed up, as he had already been picked up by police.