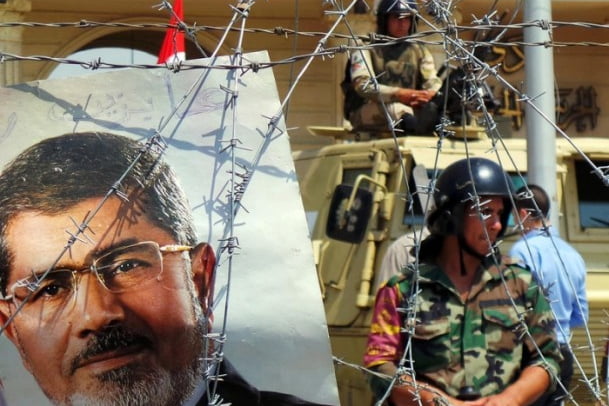 Well-respected Islamic scholar Fethullah Gülen has said democracy was once again dealt a blow in Egypt as he commented on the ouster of Mohammed Morsi in a military coup last week.

In his latest weekly speech, broadcast on website Herkul.org on Monday, Gülen shared his views on the military coup in Egypt. Recalling that the government toppled in Egypt had come to power through elections, Gülen said the ouster of this administration through a coup similar to those in Turkey on May 27, 1960, March 12, 1971, and Sept. 12, 1980, will go down in history as “evilness.” “Democracy has been once again dealt a blow,” Gülen said.

The Egyptian military on Wednesday overthrew the country’s first democratically elected president, suspended the constitution, called for new elections and announced it would install a temporary civilian government. The country’s chief justice was sworn in as interim president on Thursday.

Noting that it is “mercilessness” to topple Morsi on the grounds that he made mistakes, Gülen said one year is a very short period of time for a president to meet expectations of him. “A Muslim state nearby us is heading to elections with a democratic understanding to which is attached much importance with respect to today’s criteria. One is coming to power and just a year passes since the elections. One cannot even go beyond apprenticeship in a year.  This is a huge job, the job of running the state. And he [Morsi] is being toppled due to his mistakes according to some,” Gülen said.

According to Gülen, it is of no use today to blame Morsi for what has happened or for failing to get to know his close circle.  Noting that one should keep in mind that every human being can make mistakes and become the victim of his good opinions of people around him, Gülen said Morsi should have been warned beforehand.

“A believer nurtures positive opinions about someone but he or she can be mistaken… We can be the victim of our positive opinions one day. If someone sees this [mistake], they should warn and these people and prevent them from being mistaken,” Gülen said.

“Sometimes a group with their own interests surrounds a person. But their support just aims to maintain their own interest. They applaud and praise him. That person would assume that these people are his sincere friends. He calls what they say good as good and what they say bad as bad. That person [Morsi] might have been deceived in such a way as well. He should have been warned. The [intelligence] services I have just named should have warned him. The incitement should have been prevented from the beginning,” he added.

Gülen also warned that some circles would be making plans to see what happened in Egypt happen in other countries too. “Some who think that ‘the winds of fall began to blow somewhere and let’s make these winds blow everywhere and get away from this spring’ may make use of this issue in a different way. The utmost caution is needed,” Gülen added.

Erdoğan’s government is continuing to harass his opponents, especially people and companies affiliated with the Hizmet movement, inspired by Islamic scholar Fethullah Gülen, for their critical stance against the corruption that has implicated senior government officials.