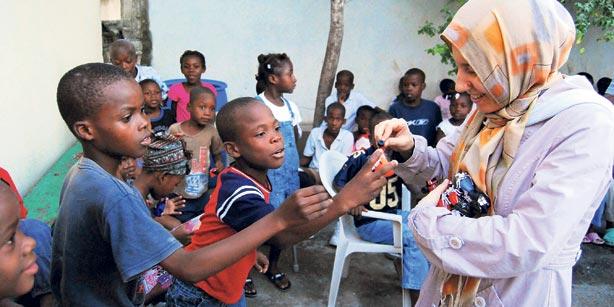 Officials from Turkish aid organization Kimse Yok Mu, whose permission to collect donations was recently revoked by a Cabinet decision, remarked that more than 60,000 orphans from seven continents will be harmed by the halt in the charity’s flow of aid.

Kimse Yok Mu, whose SMS donations line was also suspended by service providers in early October, has established and maintained 25 orphanages in countries such as Palestine, Sudan, Somalia and Bangladesh.

The charity brings help to almost 60,000 orphans in 56 countries and more than 15,000 in Turkey. As well as building orphanages in countries such as Sudan, Somalia, Bangladesh, Burundi and Kyrgyzstan, Kimse Yok Mu performs renovations and furbishes new and preexisting buildings in those countries.

Furthermore, it also grants scholarships to more than 1,300 students a year from Pakistan, Somalia, the Philippines, Sudan, Albania, Kosovo, Kyrgyzstan, Cyprus and Niger. It also gives free education yearly to 111,000 orphans and widows through vocational courses in seven countries, including needlecraft and knitting, handicrafts and various other courses, depending on the needs of the country.

Ayşe Adıgüzel, who lost her husband last year, is just one of the people who rely on the aid of Kimse Yok Mu in İstanbul. She has three children, with the youngest being 3 years old. Finding it hard to understand the attempts to suspend or stop the activities of the charity, Adıgüzel states she is happy that her children are able to have an education with the help of Kimse Yok Mu.

Giving information about the activities of the charity, international relations expert Zeynep Metin said: “Before helping people, we carry out social research to determine the real needy people among thousands of applicants. Kimse Yok Mu supplies ready cash for rent, utility bills or other expenses, as well as scholarships, stationery, clothes, furniture, accommodation and food.”

Underlining that the cancellation of Kimse Yok Mu’s right to collect donations without the permission of the authorities, following an abrupt Cabinet decision, would harm the needy the most, Metin stated that Kimse Yok Mu will go on helping people despite the circumstances.