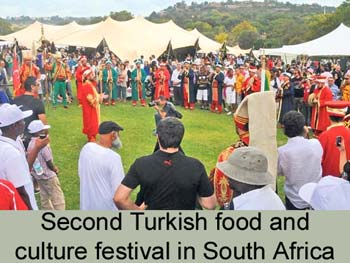 The second edition of the Turkish Culture and Food Festival in South Africa was held on Sunday at Zoo Lake, Johannesburg. Ten thousand people attended the festival, which put Turkish culture and cuisine on show. Live performances by an Ottoman janissary band, otherwise known as “Mehter” in Turkish, in particular, attracted much attention.

The Mehter band garnered much interest and increased anticipation for the festival from the day before, as they marched through the streets of Johannesburg, performing to crowds that gathered to listen to them play traditional military songs.

Students from Turkish schools around South Africa also performed traditional songs and dances for those at the festival.

In attendance at the festival were Mardin Governor Hasan Duruer and a Turkish deputy from Samsun, Birnur Şahinoğlu. Dali Tambo, the son of anti-apartheid politician Oliver Tambo, and his wife Rachel Tambo were also present. Describing the festival as a “wonderful event,” having attended two years in a row, Tambo said that he looks forward to visiting Turkey in the future.

Many South Africans, tasting Turkish cuisine for the first time, queued up outside food stalls to savor Turkish döner kebabs, kebabs, baklava and other traditional dishes. Most of the food was homemade by Turkish families living in South Africa, while the döner kebabs and shish kebabs were cooked and sold during the festival.