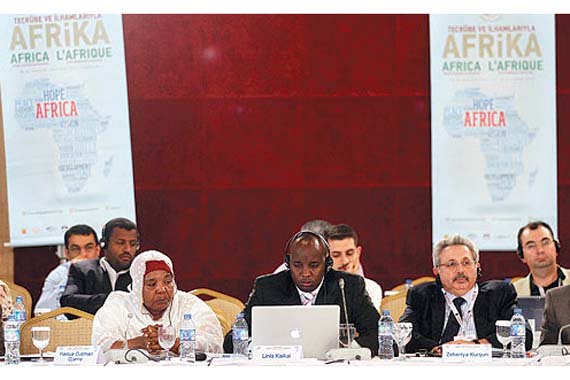 Participants of the Abant meeting from Turkey and Africa agreed that mutual understanding is improving.
(Photo: Today's Zaman, Turgut Engin)

The unprecedented level of interaction between Turkey and Africa was the dominant theme of the 29th meeting of the Abant Platform on Friday, which convened with the theme of Africa in Abant, Bolu.

Participants from Turkey and Africa in the fields of academia, politics and the media agreed that mutual understanding is improving thanks to Turkey’s Africa initiative at diplomatic level and by means of the Turkish schools in different parts of the continent.

Turkish Foreign Minister Ahmet Davutoğlu said in a message he sent to the meeting that the second half of the 21st century especially will be Africa’s time and the continent will take its deserved place in the international system. Emphasizing the increase in the level of democracy in Africa, Davutoğlu said that while there were only three democracies in 1989, today one-third of the continent has democratic rule.

Minister Davutoğlu said that Turkey’s initiative in Africa, which started in 1998, has been a complete success. “Africa constitutes one of the most dynamic and key areas of Turkish foreign policy today,” Davutoğlu further stated.

Therese Olenga, minister of education for the province of Kinshasa in the Democratic Republic of Congo, thanked the Journalists and Writers Foundation (GYV) for organizing the meeting, saying, “We can only learn from each other through close human contact.”

Referring to President Abdullah Gül’s visit to her country in 2010, Olenga said that the visit will be reciprocated.

Africa and Turkey show each other mutual respect

Human rights expert Salah Siddig Hammad from the African Union’s political affairs department complained about the decades-long negative image of Africa, saying that Africa was labeled as a hopeless continent of diseases and darkness. However, he believes that Africa has “proved to be a continent of fast progress.” For Hammad, “The new Africa is only 50 years old” because has only been independent of colonialism since then.

“Africa is not the backyard of any other continent anymore,” he announced, welcoming Turkish businessmen to the continent.

According to Hammad, there is a unique relationship between Turkey and Africa thanks to their “mutual respect.” Because of this, Africa receives Turkish businessmen with respect, Hammad stated. “We welcome the visit of Obama, but all other leaders need to understand that Africa now is a very important player,” he further added as far as Africa’s relations with the rest of the world are concerned.

Turkish Ambassador to Chad Professor Ahmet Kavas said that a decade or two ago, no one would imagine that Africa would be such a great concern for Turkey, but Africa means a lot to Turkey now. However, according to him, Africa was already a familiar continent to Turkey because its relations with Egypt started centuries ago. “European colonial powers closed the gates of Africa for all others [in the last century],” Kavas pointed out.

Joining the criticism of the international media’s inaccurate reflection of Africa, Kavas stated that the international media only displays negative images from Africa while overlooking its strengths. As far as Africa’s problems are concerned, Kavas said that “it is the Africans themselves who know the best for their continent.”

In a similar comment about Africa’s image, Kenyan journalist Uduak Amimo said that she became a journalist because she was fed up with the way Africa is portrayed in the international media.

Proving that Turkey takes a different perspective of Africa, İstanbul Fatih University Rector Professor Şerif Ali Tekalan said that the Turkish people learned more about the continent through the selfless teachers who went there to work at the Turkish schools there and liked it. Stating that the first Turkish schools in Africa opened in 1995, Tekalan also talked about the Nigerian Turkish Nile University in an effort to show improvements in the educational activities of Turkey on the continent. Tekalan also noted that Turkish teachers are now able to speak the local languages in Africa.

Muhammad Niasse, a former member of parliament from Senegal, said that Africa used to be a continent of peace and that the wars and violence came from elsewhere (through colonialism).

Zaman columnist Ali Bulaç, on the other hand, defined Africa’s problems as stemming from the artificial nation-state borders, the comparative advantage mentality in agriculture that confines each country to growing certain crops, and the remnants of a colonial mentality.