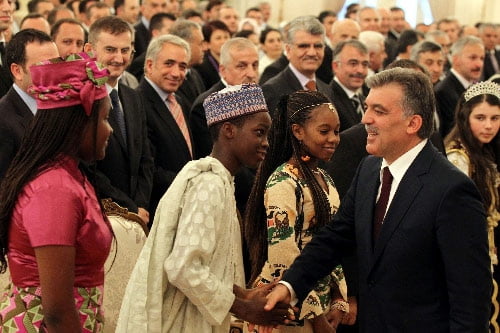 Turkish schools have been opened in different parts of the world with the efforts of Turkish entrepreneurs, and have been widely praised for their accomplishments. Many state officials, academics and businessmen are eager to send their children to these schools.

Georgian Head of State Mihail Saakasvili’s mother, Prof. Giuli Alasania Saakasvili, stated that these schools act as a bridge between Turkey and the host country. She also remarked that Turkey’s investments in education had begun to bear fruit in many countries, especially Georgia, expressing hope for the future of such investments.

Mongolian Construction and Urban Development Minister, Janlav Narantsatsralt, said that, as a government, they supported the Turkish schools. Assistant Minister of Mongolia National Education, D. Damba Ochir explained, “There are five Turkish high schools in our country. Turkish schools are higher quality than other schools. Many of our students go to study in Turkey. Last April our minister of education made an agreement with Turkey in the field of education.”

Prof. Damir Ishakov from Kazan University said that there were 26 times as many applications to Turkish schools in the country as there was capacity.

Attending the First International Social Sciences Congress at Kocaeli, Prof. Orozobek Moldaliyev, head of the Political and International Relations Department of the Kyrgyzstan Foreign Ministry Academy, pointed out that Turkish schools raised a generation of students without being in conflict with Kyrgyz traditions and or denying its identity. Moldaliyev added, “There are expensive schools in our country opened by other countries; however, they do not teach the same degree of good manners as the Turkish schools.”

Together with Tajikistan Assistant Minister of Industry Abdulkerim Nigmetov, a group of Tajik businessmen who were former students at Turkish schools, opened 14 years ago in Tajikistan, visited various Turkish industrialists in different provinces. They explained that although products were cheaper in China, they prefer doing business with Turkey due to their fluency in the Turkish language and their love for Turkey, which they learned from Turkish schools in their country.

Azerbaijan National Television and Radio Administration Director Nushiravan Maharramov expressed his opinion regarding Turkish schools in his country: “We send our own children to these schools. Here they are taught good ethics and manners. They receive an education that meets world standards. When these elements are taken into consideration, children studying at these schools carry great importance for the future of Turkey. Turkey will be able to reach the rest of the world through these students.”

Tatar Professor Nadir Devlet, head of the History Department at the Seven Hills University Faculty of Arts and Sciences stated, “At these schools our youth are learning the Turkish language. They are learning to speak their native language. There are many young people in the Russian Federation who do not know their mother tongue. This is a very positive service.”