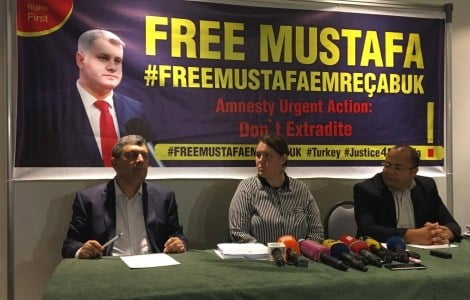 TBILISI, DFWatch–A detained Gülen school official is asking for asylum in Georgia in order to avoid extradition to Turkey, where he may face brutal and inhumane treatment, according to his lawyers.

Georgia detained Mustafa Emre Cabuk in May. He is one of the managers of Demirel private schoool in Tbilisi.

Turkey is believed to be putting pressure on Georgia to crack down on educational institutions associated with the exiled Islamic preacher Fethullah Gülen.

“My husband’s extradition means that my young children and I have to go to Turkey too. Not only him, but we are also in great danger. My children are threatened through social networks and Turkish media,” Cabuk’s wife Tuba said at a press conference on Monday.

Cabuk’s lawyer Soso Baratashvili slammed the decision to detain him as legally unfounded and harmful to Georgia’s ‘dignity and international prestige’.

If they don’t find justice in Georgian courts they’ll take the case to European Court of Human Rights in Strasbourg.

Meanwhile, Georgian officials insist that Turkey has guaranteed to treat Cabuk according to European  standards.

“Naturally, we trust [Turkey] because it’s about a friendly state that is a NATO member. When Turkey gives such promises and a diplomatic guarantees on a particular person, it is obvious that we have no reason to distrust,” refugees minister Sozar Subari told Imedi TV.