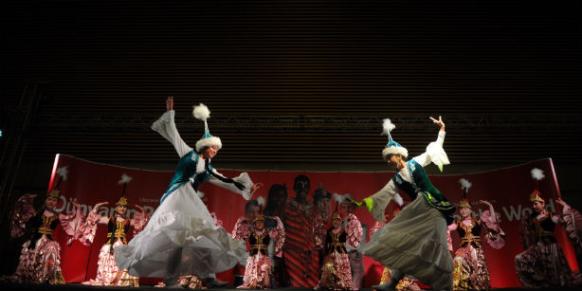 The festival was an updated version of the Turkish Olympiads and it took place outside Turkey for the first time, after Turkey’s Justice and Development Party (AK Party) government refused to allow the event to occur in Turkey.

The festival took place in a joyful atmosphere at the headquarters of the African Union in Addis Ababa on Saturday, and students from countries including the US, Tunisia, Tajikistan and South Korea sang songs in Turkish as well as in Amharic, English, Arabian, French and German. The audience was also entertained by folkloric dances performed by Kyrgyz, Kazakh, Azeri and Ethiopian students.

International students who were in Addis Ababa for the festival were received by Ethiopian President Mulatu Teshome and Prime Minister Hailemariam Desalegn. The event was attended by many Ethiopian and Turkish guests including Ethiopian Foreign Minister Dawano Kedir. Speaking at the event, Kedir thanked Turkish schools in Ethiopia for organizing the event.

Chairman of the Turkish Confederation of Businessmen and Industrialists (TUSKON) Rızanur Meral presented an award to the African Union’s political affairs commissioner, Aisha Abdullahi. Speaking on behalf of African Union President Nkosazana Dlamini Zuma, Abdullahi praised the Turkish schools in Africa and said that they promote intercultural relations in the world and increase the quality of education in the continent.

TÜRKÇEDER President Ali Ursavaş, also speaking at the event, said they are organizing the Language and Culture Festival for the 12th time this year, adding that they will continue to carry out Turkish Olympiad programs as part of the festival.

Commenting on the event, online news portal Rota Haber’s editor in chief, Ünal Tanık, said the term “Turkish Olympiads” was insufficient to describe what the organizers have done as part of the festival. “This year, [the festival] has become globalized. It will bear fruit in the upcoming period when cultures of all the nations combine with the culture of Anatolia,” he said.

Mustafa Yılmaz, Ankara representative of the Milli Gazete daily, said: “Seeing different cultures, colors and languages together makes us happy. This counts as our country’s credit. The solution of the problems the world is having today is to regard diversity as richness and to enlarge our common ground. Such events contribute to brotherhood in the world.”

Ahmet Takan, Ankara representative of the Yeniçağ daily, said: “I feel very proud to be a Turkish citizen when Turkey and the Turkish language attract such attention. Turkish schools need not only Turkey, but also the whole world. I hope unfair criticism against these schools will stop as soon as possible.”

The daily Bugün’s Ankara representative, Faruk Mercan, also praised the festival, stressing that the International Language and Culture Festival had taken place for the first time in the capital city of the African Union.

The International Language and Culture Festival used to be organized as the International Turkish Language and Culture Festival, or the Turkish Olympiads, as it’s popularly known. The Turkish Olympiads, a contest annually held by TÜRKÇEDER — which is close to the Hizmet movement, inspired by Islamic scholar Fethullah Gülen — since 2003, have brought hundreds of foreign students from Turkish schools throughout the world to Turkey every year.

TÜRKÇEDER previously announced that the 12th Turkish Olympiad would be held in June this year, and many countries that are home to Turkish schools affiliated with the Hizmet movement held language festivals to select students to compete in the 12th International Turkish Olympiad. However, Prime Minister Recep Tayyip Erdoğan said on March 21 that his government will not grant the organizers of the Turkish Olympiads permission to use any stadium or sports hall this year.

Erdoğan accused the Hizmet movement and its “foreign collaborators” of attempting to overthrow his government through a “judicial coup” ever since the corruption investigation that shook his government became public on Dec. 17, 2013, a claim firmly rejected by the movement.

In March, Foreign Minister Ahmet Davutoğlu sent a message to Turkish ambassadors and diplomats serving abroad ordering them not to attend the overseas selections phase of the 12th Turkish Olympiads.

Erdoğan previously attended several ceremonies of the Turkish Olympiads and praised the organizers of the event and thousands of Turkish teachers of schools affiliated with the Hizmet movement who contributed to the spread of Turkish as a global language abroad.

During the heat of the Gezi Park protests on June 16, 2013, Erdoğan spoke at the closing ceremony of the 11th Turkish Olympiads, and slammed protesters amid the roar of approval from thousands of spectators. He said the “real Turkey” representing most parts of Turkey had gathered at the stadium.

On June 14, 2012, also delivering a speech at the closing ceremony of the 10th Turkish Olympiad, Erdoğan invited Fethullah Gülen to return to Turkey from his self-imposed exile in the US. In the same year, the Turkish State Mint minted special TL 1 coins to honor the 10th year of the Turkish Olympiads.