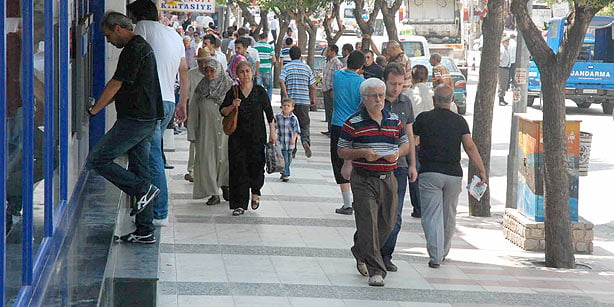 The National Intelligence Organization (MİT) recently sent a document in which all religious communities and groups within state institutions, described as “parallel state structures” (PDY) in the document, were cited as the main target to be monitored in 2014, the Taraf daily claimed on Friday.

“All [members of] religious groups described as PDY were referred to as the primary target [to be monitored],” the daily said.

The news report claimed that MİT’s only task from now on would be the surveillance of members of all religious groups, whether domestic or of foreign origin, within state institutions.

Although the report stated that the MİT document, which was partially displayed next to the daily’s story, made no mention of the Hizmet movement, a religious community inspired by Turkish Islamic scholar Fethullah Gülen, the intelligence agency’s primary target may well be people with links to the Hizmet movement, considering that top government officials, including Prime Minister Recep Tayyip Erdoğan, have been speaking harshly against the Hizmet movement since the breaking of an ongoing graft probe in which four former Cabinet ministers are involved.

Analysts are concerned that the government’s attitude may take the form of a witch hunt that will undermine democracy. “MİT is being designed as a tool of oppression in the country,” Orhan Kemal Cengiz, a lawyer with experience in human rights cases, told Today’s Zaman. Criticizing Erdoğan’s demonizing remarks about the Hizmet movement, as the prime minister provided no concrete evidence related to the accusations, Cengiz added, “It is democracy that will be most harmed by this [attitude], because this is turning into a witch hunt.”

“As of Jan. 15, MİT Undersecretary Hakan Fidan sent, upon instructions from the Prime Minister’s Office, written instructions of critical importance to all the units of the organization,” the report said.

According to the daily, while instructing the units that they should end their espionage and counter-espionage against organizations that MİT had until then kept under surveillance, as well as its work on other criminal organizations, Fidan indicated in the document “Target Priorities and Planned Requirements for the Year 2014” that all religious communities that form the “parallel state,” claimed, by the government, to exist within certain state institutions such as the National Police Department and the judiciary, are now the intelligence organization’s primary targets.

In the document, MİT members were, according to the report, instructed to identify and inform their superiors of any member of a religious community in state institutions, monitor them through surveillance techniques and attempt to recruit these individuals as informers for MİT.

The MİT document reportedly said, “As part of the ‘Target Priorities and Planned Requirements for the Year 2014,’ parallel state structures (PDY) (including all religious groups) that receive support from domestic/foreign structures and which are engaged in illegal activities inside state institutions are to be monitored as primary targets.”

It continued: “Within the context of current [political] developments, it has been detected that some groups/formations (local/foreign radical religious organizations together with local/foreign religious movements) that are or are not considered primary targets are illegally nested within the state, first and foremost in the judiciary and the security forces. It is of importance, from now on, to monitor and control these formations of local/foreign origin.”

According to the MİT document, the daily reported, units of the intelligence organization have been asked, in an effort to detect signs of parallel state activity, to make use of present, qualified sources of information and also to make efforts to rectify the lack of qualified sources in this area. The information collected about parallel state structures as a result of the work to be carried out is to be sent, the document reportedly said, to the head of MİT, with the reference number “13113.60000.”

“Involvement in such practices is appropriate for a police state,” Mümtaz’er Türköne, a political scientist at Fatih University, told Today’s Zaman. Noting that the MİT document is indicative of a systematic profiling of individuals, Türköne said, “It is not possible to associate [such a practice] with democracy.”

Following the ongoing graft probe, in which four Cabinet ministers are involved, officials from the ruling Justice and Development Party (AK Party) government have described the corruption investigation as a plot aiming to overthrow the government. With obvious implications, the government also accused the Hizmet movement of involvement in the plot.

During his party’s parliamentary group meeting on Tuesday, Prime Minister Erdoğan accused the Hizmet movement again of orchestrating the wide-reaching corruption and bribery investigation, likening members of the movement to a shadowy group that carried out politically motivated assassinations in the past.

Increasing the intensity of his criticism, the prime minister likened the Hizmet movement to the Hashishin, a sect of Shia Muslims originating from Persia. The group, thought to have been active between the 11th and 13th centuries, supposedly carried out politically motivated assassinations after consuming hashish. The word “assassin” is derived from the name given to the Hashishin.

“We saw this in history during the rule of the great Seljuk Empire. We saw how a fanatical secret organization tried to take the state higher-ups captive and cooperated with enemies to this end. The Republic of Turkey will never allow such insidious powers or attempts to paralyze the state,” Erdoğan said.