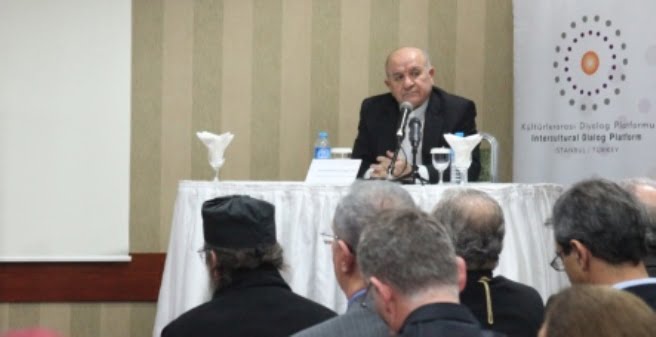 Signing ceremony for the book “Fruits of Dialogue” written by Chorepiscopus Yusuf Sag was held in Istanbul.

Humanity has been preparing its own end, said Assyrian Catholic Church leader in Turkey Chorepiscopus Yusuf Sag on Tuesday speaking at the signing ceremony of his book “Fruits of Dialogue” organized by International Dialog Platform in Istanbul.

“If we do not bomb the land, and not avoid sharing with others, there would be no starvation across the world,” Sag said.

“What is the thing that cannot be shared in the world,” he asked and stressed that all the livelihoods were granted by Allah. “Why do not you be contented with what you were granted,” he asked addressing all the human beings.

Sag said he was much enlightened by Ecumenical Patriarch Bartholomew and Sunni Muslim leader Fethullah Gulen when writing his book.

Pointing to the works and efforts of Gulen, he said, “What is more significant in life is to see the things around you through your brain, and that is what Gulen cares about.”

Ecumenical Patriarch Bartholomew said it was crucial to have the needed knowledge in advance to the dialogue and said, “We are all responsible to turn the world into a place where peace and tranquility reign.”

Pointing out that the book “Fruits of Dialogue” is the second book of Sag, Deputy Armenian Patriarch Archbishop Aram Atesyan said, “You are wrong if you believe that the task of a religious man is only to pray and that only the speeches of him are effective. Both his speeches and writings are effective, and he knows very well how to use them in the best way.”

He stressed that the most significant issue of the 21st century was ‘dialogue’ and said no problem could be solved by avoiding sitting around the table.

“We still cannot fully benefit from the dialogues, but still we have to maintain the dialogues in order to provide the societies with friendship.”

“The fruit will grow, and we will eat it one day,” Atesyan said referring to the book.

The ceremony also hosted Mufti of Istanbul Rahmi Yaran and Metropolitan bishop in the diocese of Istanbul and Ankara as the Patriarchal Vicar Yusuf Cetin. Both religious leaders underlined the importance of dialogue and friendship between people.

President of The Journalists and Writers Foundation Mustafa Yesil pointed in his speech to the ‘major steps’ that all the religious leaders have taken in a period in which he said Turkey was making efforts of dialogue.
“Dialogue is not an option,” Yesil said, “it is an obligatory way through which we all have to go.” “We both need and have to understand and know each other, love each other and live together.”

Concerning the Assyrians living in Turkey, Vice President of The Journalists and Writers Foundation Cemal Usak said, “Though Assyrians in Turkey are minority in terms of numbers, they have a special place in terms of value.”

He said the foundation undertook to publish the book with the aim of informing the public about the existence of Assyrians as well as the language they use.