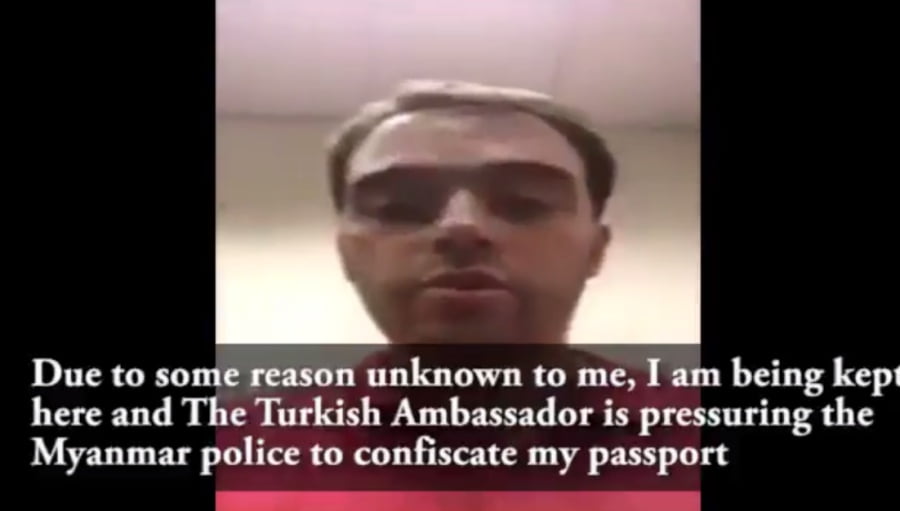 Myanmar-based education professional M. Furkan Sökmen and his family were detained yesterday at the Yangon International Airport while trying to board a flight to Bangkok. The teacher appears to be the latest victim of the Turkish government’s worldwide “purge” targeting alleged followers of the Gülen opposition movement.

In a video posted on social media during an altercation with immigration officials at the Yangon airport, the teacher said the Turkish ambassador to Myanmar had pressured police to confiscate the family’s passports.

Hizmet Movement’s family is kidnapped from Myanmar to Turkey
They are in Airport now
Please help @amnesty @UNHumanRights @hrw pic.twitter.com/h30dwBBuII

The True Stories Twitter account reported that Turkish embassy staff tried to force the family onto a flight to Turkey via Dubai, but the family refused and has since been in detention inside the embassy.

Human Rights Watch deputy Asia director Phil Robertson told Coconuts: “Human Rights Watch is very concerned that if he is forced back to Turkey, he could face mistreatment and torture, long periods in pre-trial detention, and at the end, a trial on trumped charges before a court that fails to follow fair trial standards. This is what has happened to Turkish nationals snatched or forced back from other countries like Malaysia and Saudi Arabia.”

“The Embassy of Turkey unilaterally revoked or limited their passports in some way to make them vulnerable, and then sought to compel Myanmar to deport them to Turkey. This is a nasty, rights abusing tactic that is illegal under international human rights law because it renders them stateless. But clearly, the increasingly dictatorial government of President Erdoğan is prepared to run roughshod over rights and put pressure countries like Myanmar to go along,” Robertson said.

“Myanmar has to release the family from custody and provide them with an opportunity to seek and receive protection,” he added.

Government spokesperson Zaw Htay told AFP: “It has nothing to do with the Myanmar government. He and his family will be deported as their passports are invalid.”

According to one source who spoke on condition of anonymity, M. Furkan Sökmen previously worked as a “head of accounts” and “financial administrator” for Horizon International Schools, which include six campuses located in Yangon, Mandalay, and Naypyidaw.

Earlier this month, the school rebranded under pressure from the Myanmar government. The school had been under investigation for links to “terrorist organizations” since the failed coup against Turkish president Recep Tayyip Erdoğan in July 2016.

Several days after the attempted coup, the Horizon International Schools website released a statement condemning the coup and calling for its leaders to be brought to justice.

“We openly condemn all radical religious groups that are causing violence and sufferings [sic] around the world and would like to announce that we have absolutely no link to any of them,” the statement said.

The Gülen movement, which is listed as a “terrorist organization” in Turkey, has also denied any involvement in the coup attempt. International investigators have found no evidence of the movement’s involvement.

Since the coup attempt, Erdoğan has orchestrated an international crackdown against people suspected of having links to the US-based Turkish cleric Fethullah Gülen, including calling on foreign governments to punish Gülen followers abroad. Saudi Arabia, Malaysia, and Georgia are among the few countries that have previously complied with Erdoğan’s request.

Earlier this month, three Turkish nationals – a teacher, an academic, and a businessman – were abducted without warning in Malaysia and deported. Their detention was followed by contradictory statements from Malaysian officials: the deputy prime minister claimed the trio had links to the Islamic State, while the police chief said they were linked to Gülen.

The Turkish government has reportedly confiscated more than 50,000 passports and arrested or fired over 100,000 people since the crackdown began.

İPEK ÜZÜM A grand inauguration ceremony was held at 19 Mayıs Stadium in Ankara on Saturday night for the 11th International Turkish Language Olympiad, a festival that celebrates the Turkish language and this year brought together 2,000 students from 140 countries around the world. The 11th Olympiad, which is organized by the International Turkish Education […]