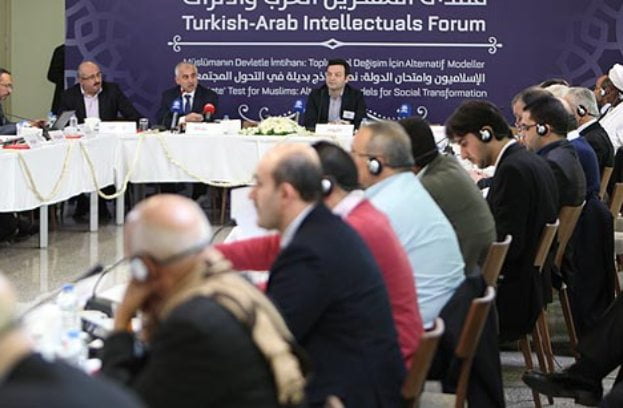 “As far as I can see, Erdoğan is doing the same thing to the Hizmet movement as what Egypt’s army chief and defense minister General Abdel Fatah al-Sisi is doing to Ikhwan [the Muslim brotherhood],” said Muhammad Sharkawi, a professor from Cairo University, despite differences between the Hizmet movement and the Muslim Brotherhood. However, according to him, this viewpoint is not widely held on the Egyptian side, and he expressed astonishment about the Erdoğan government’s treatment of the Hizmet movement.

A professor from Morocco, Muhammad Cekip, said that unlike the Hizmet movement, which was born in Turkey, civil movements of the Arab world target powerful leaders instead of individuals. “The Hizmet movement places individual beings at the center, and the desire to rule becomes secondary,” he said, further explaining that politics dominates the lives of Arab people more than civil society. “What would our reaction be if a secular party treated the Hizmet movement this way?” asked Cekip, in an effort to call the Arab scholars to be self-critical.

Sociology professor Samir Budinar from Morocco said there is no mass civic movement similar to the Hizmet movement in the Arab world, even though political Islam is stronger in those societies. Another Arab participant agreed with Budinar, stating that the success of the Hizmet movement is something that not all states can have.

Speaking on behalf of the Hizmet movement, which is inspired by the teachings of Islamic scholar Fethullah Gülen, Journalists and Writers Foundation (GYV) President Mustafa Yeşil said that the Hizmet movement has no intention of “acquiring” the state apparatus, and urged the governing Justice and Development Party (AK Party) against perceiving the movement as a threat.

“Hizmet is a positive movement,” Yeşil said, as he rejected the baseless allegations of a parallel structure within the government. According to him, had there been a single piece of evidence of such a parallel structure, the military tutelage system that dominated Turkey for decades would have brought it to the surface.

Referring to several lawsuits that the regime filed against the Hizmet movement and Fethullah Gülen on charges of being a terrorist organization, Yeşil said that Gülen was acquitted even during the height of the military tutelage in Turkey, despite heavy control of the judiciary by the military.

Yeşil stated that Erdoğan has changed, providing statements made by former Minister of Interior and Erdoğan’s friend for 40 years, İdris Naim Şahin as evidence. Following the Dec. 17 corruption probe, Şahin resigned in protest of his party’s stance, saying that Erdoğan has been surrounded by “an oligarchical clique” whose intentions are not known.