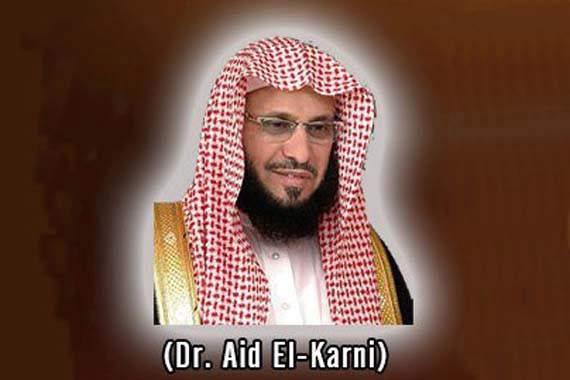 One of the most celebrated scholars of Saudi Arabia and the Arab world at large, Sheikh Aaidh al-Qarni delivered sermons on “Tabi’in” (a referral to the people who lived in an age right after the Prophet Muhammad’s companions’ generation) at several salatin mosques (mosques built by Ottoman sultans) in Istanbul, on June 1 thru 9. The sermons that kicked off at Fatih Mosque continued for nine consecutive days. Having arrived in Istanbul for “Tabi’in’s Flags” project by Saudi Arabia-based Iqra TV, Sheikh Aaidh al-Qarni made noteworthy comments on Turkey and Hizmet Movement, in his interview with Cihan News Agency.

Noting that he finds serenity every time he comes to Turkey-with which Saudis have ages-long strong ties- al-Qarni said, “To us, Turkey symbolizes civilization, history, royalty and culture. We have been enjoying deep-rooted ties with Turkey for ages. I am delighted to have come to Turkey for which my heart is filled with love, as a Muslim, knowledge seeker and a scholar. As Saudi Arabia people and state, we regard Turkey as our brother.” He further said he had been to nearly 40 countries so far and he was amazed to see the overflowing mosques, minarets and to hear azans in Turkey. “We would like to thank you Turkish people -descendants of Mehmed the Conqueror, Suleiman the Magnificent and other sultans- for your contributions to Islamic civilization, for your attitude and hospitality towards us and Syrians as well” al-Qarni said.

He delivered three different series consisting of four, three and two sermons at Fatih Mosque, Blue Mosque and Suleymaniye Mosque respectively, following salat al-maghrib (daily evening prayers). The theme in each was the Tabi’in imams that lived in the second Hijri century.

“We are hopeful of Turks for Muslims. Turkish people are fond of culture, civilization, peace and communication,” said the scholar and noted he has a very high regard for Fethullah Gulen and Hizmet Movement. Noting that he is inspired by Gulen, al-Qarni offered his thanks to Gulen for his efforts and services. Aaidh al-Qarni underscored that Gulen, as an ascetic, is serving in an affectionate manner by integrating zuhd (asceticism) and Islamic spirit. He additionally emphasized that Gulen is making effort to communicate the true Islam in his distinctively polite, gentle and wise manner.

Al-Qarni authored over 40 pieces in literature, poetry, personal development, prophetic biography, Islamic law and tafsir (Qur’anic interpretation). His “La Tahzan” particularly (translated into English as “Don’t be sad”), which details how to be happy within sharia rules and is available in many languages, has enjoyed a remarkable popularity among masses.