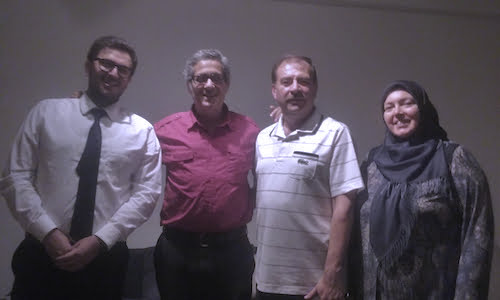 Every religious holiday has its’ rituals, and on Iftar, the evening meal after the daily fast during the Islamic holiday month of Ramadan, that ritual is to break the fast with eating a date – the small, dark and sweat fruit from a certain palm tree. The Quran has it that the Prophet Mohammed broke his own fast by eating a date and thus eating one is like living in the footsteps of the prophet.

I learned this at my first Iftar last week as I am not Muslim by faith. I was a guest of Turkish Cultural Center Executive Director M. Fethullah Onal.

The board member, Haldun and his wife, Funda, fled Turkey about two years ago with their three daughters and are now seeking political asylum in the United States because if they go back to Turkey they face arrest and likely torture (it is for this reason their last name cannot be used for this story). Once a successful manufacturer of washing machine products in the city of Manisa, Haldun, Funda and their children are now a family without a country; their factory turned over to a government trustee, their passports taken away, and their property and belongings nationalized.

The family’s crime was belonging to the Hizmet movement, which are followers of Muslim cleric Fethullah Gülen, a Turkish ex-patriot and American legal resident, who has lived in Pennsylvania since 1999. Gülen was once an ally to Turkey President Recep Tayyip Erdoğan, but now Erdogan sees him as a threat to the country. It is on this pretext that Erdogan declared a national emergency and cemented himself as an authoritarian leader, arresting tens of thousands of civil service workers, teachers, military members, journalists and business people, stripping them of their passports and right to work.

While Haldun and Funda’s plight may or may not be of interest to KCP readers, the question arises what importance does this have to greater Brooklyn, and perhaps the world?

The answer lies in the teaching of Gülen and his movement. For the cleric is also a leading proponent of a modern-oriented version of Islam. As such, the movement has established schools and universities around the world focussing more on secular education including math and science, and less on religion, as well as establishing dozens of charter schools throughout the United States with many being in low-income and communities of color.

Gülen and his followers are also on the cutting edge of establishing interfaith dialogue among all the world’s religions. The cleric has met with top Christian clergy, including the Pope, as well as Israel’s head Sephardic rabbi, and the Turkish Cultural Center holds many interfaith workshops and gatherings.

Giving the Gulen movement even more credence is it comes at a time when President Trumps’s views are often divisive and wary of Islam, the continued flood of refugees from war-torn Islamic countries, and the small, but dangerous extremist element within that religion as evidenced by recent terror attacks in England, Egypt and elsewhere.

Perhaps the answer is some kind of reformation within the religion itself, similar but not exactly like Christianity did in Europe’s middle ages. Ideas built and ironed out within the religion itself that separates Mosque and state. And while, I’m not that well versed in the pros and cons of Gülen and the Hizmet movement, it does appear they are moving in that direction.

This was the takeaway thoughts from my first Iftar – that and enjoying an excellent homemade Turkish feast, starting with the ritual eating of a date.