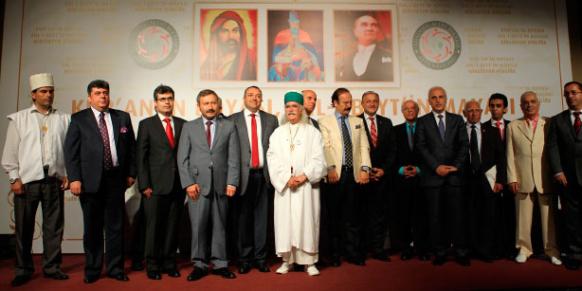 Delivering a speech at the event, Cem Foundation President İzzettin Doğan said he was pleased to host the iftar. Saying that the holy month of Ramadan offers a spiritual atmosphere which encourages integration between different cultures and reminds people of the importance of love, respect and peace, Doğan went on to say: “Turkey needs what we have here tonight. Solidarity and coexistence are the most important things. Due to a lack of these things, the Islamic world is going through a troubled period and is facing huge crises and sectarian separation. The Islamic term ‘jihad’ has nothing to do with killing and torturing innocent people, as some so-called Islamic groups do in the Middle East today. Although Turkey is facing similar problems, it is obvious that we have more integration and solidarity compared to other Islamic countries. But this is not enough. We are going through a difficult period. The more we try to understand each other, the stronger solidarity will be in the country.”

Doğan said it is totally natural that a country like Turkey should be home to many cultural and religious differences, adding that different ideas and beliefs need to be respected, as this is the main condition for peace in a country. “There are representatives of Turkey’s non-Muslim population here. It is of utmost importance to be in solidarity with everyone and to know the realities of our country. We are all citizens of this country, no matter what our beliefs and opinions are. Small states can’t be rich or colorful; they are monotonous and not diverse. Therefore, a lack of diversity goes against a country being great,” Doğan said and added: “There are different sects and beliefs on the grand ‘path of Islam.’ Within this framework, taking the expectations and requests of Alevi and Bektaşi citizens into consideration is the duty of the government.”

Highlighting that no community or individual is superior to any other, the foundation’s president added that all citizens of Turkey have the same amount of responsibility for maintaining peace in the country.

Also making a speech during the event, singer-songwriter Gencebay expressed his pleasure at being invited to the iftar by the Federation of Alevi-Bektaşi Associations. “I want to read you the lyrics of one of my songs that I composed years ago. It reads: God created his things so beautiful that it is impossible not to fall in love with them. I think this is the consensus of us all,” he said, adding, “The Alevi brothers and citizens with whom we have been living together with our customs, traditions and beliefs for hundreds of years will, of course, have some demands and requests.”

MHP parliamentary group deputy chairman Vural also spoke during the event, stating that the Alevis’ cemevis should be recognized by the state as places of worship. He also said this issue regarding the Alevi community is beyond politics. “We are going through difficult times. That’s why we need more of these iftar gatherings. We can only stop the hatred and division by organizing these kinds of meetings of solidarity. May God forbid us from having dissension among ourselves.”

Vural continued, “Considering the conflicts that took place between different communities in Turkey in the past, the government should avoid doing anything that will remind people of those conflicts; this can lead to hatred and disputes between communities.”

Evaluating the recent allegations against the Hizmet movement, Vural told Today’s Zaman that making false statements against the Hizmet movement without any concrete evidence is political persecution. “The state of law cannot be suspended in this country. Turkey is a country where everybody should be able to live in peace. It is unacceptable for a politician to operate as both prime minister and judge. Oppressing different groups in Turkey is also a crime against humanity,” he noted.

President Abdullah Gül also sent a message to the iftar dinner which was read aloud. The president’s message of solidarity was well received by the guests.

“I am not able to attend the iftar held by the federation due to my busy schedule. But I want you to know that my heart is with you. We need solidarity. We need more of this type of atmosphere. There is nothing we cannot achieve if we collaborate. I especially thank those who organized this iftar to allow people from different parts of Turkey to meet. This is what we want to see.”

President Gül also stated in his message that all Turkish citizens, irrespective of their beliefs and views, are an integral part of the country, adding that he was happy that “all of Turkey’s colors” were in the same room.

Alevi Bektaşi Federation President Özel told Today’s Zaman that, contrary to prevailing opinion, there is no tension between Sunni and Alevi citizens in Turkey.

“As far as I can see, there is a mutual feeling of love and respect, as there always has been. But unfortunately tensions start to emerge now, because this issue is being politicized. The result of this ultimately does not alter the fact that, despite everything, Turkey will eventually, over time, solve this issue by de-politicizing it.”