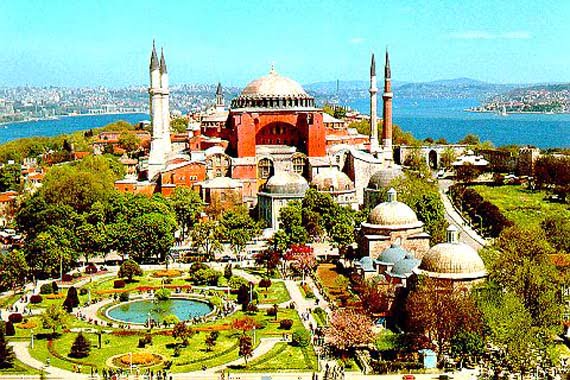 Hagia Sophia is a former Orthodox patriarchal basilica, later a mosque, and now a museum in Istanbul, Turkey.

By the time you read this, I will be in Istanbul, as part of a group beginning a week-long tour as a guest of the Gulen Movement. We will visit tourist sites, but also meet with media folks, spend time in schools and universities and enjoy several dinners in private homes. We will be with a small group of folks from the Athens area, most of them connected to the University of Georgia.

While I’m always excited to travel, this trip promises to be a once-in-a-lifetime opportunity. We will be with Turks, not just tour on our own, which I did with great ease and success last year. On this visit we will have access to people and institutions that a regular tourist might not even know about, much less visit.

I’m particularly interested because our hosts are Muslim. The Gulen Movement operates largely on Sufi principles, known to many of us through the poems of Rumi that our own Coleman Barks has made his life’s work. They subscribe to an approach of love and tolerance, with an emphasis on gaining understanding rather than converting. I’m sure they would be thrilled to add followers of Muhammad, but that is not their primary purpose.

My husband has read widely on the history and development of the Muslim faith, while I am mostly ignorant of those details. I know a few Muslims, all of whom are fine, caring people with a gentle approach to life and its challenges. There are different ways to practice all major religions, and that applies to Islam as well.

The Muslims I know bear not the slightest resemblance to the fire-breathing terrorists we see on the news. I grieve the ignorance and prejudice that pervades much of our public discussion. I shall welcome the opportunity to understand how their faith drives their daily lives, and to share how my Christian faith guides mine. We serve the same God and share more common tenets of faith than most Americans are willing to admit.

Our itinerary includes visits to the Jewish Museum and Christian sites at Ephesus. The Hagia Sophia, now a museum, has served Christians and Muslims over its centuries of history. When I visited last year, I was struck that Muslims had preserved the ancient Christian symbols and art, even while putting their own front and center.

All this reiterates the Gulen teachings of tolerance and openness.

At the same time, I understand that the Gulen Movement is the subject of some controversy in the United States, the most notable local example being the collapse a couple of years ago of Fulton Science Academy, a public charter school. Affiliates of the movement operate more than 100 charter schools in the United States right now, and have been successful in business using practices that many Americans deplore. Best I can tell, they have not broken any laws.

I simply don’t know enough to make a judgment, even after reading lots of pros and cons and talking with some people with more experience with the group. I will do my best to keep an open mind. I’m not afraid to ask difficult questions, but will do so tactfully and at appropriate times. My role here is guest, not reporter. As a matter of fact, the invitation came to my husband, and we are covering the costs for my participation.

Our schedule for the next week will be pretty hectic, with little or no time for me to do any substantive writing. Instead, I will file brief pieces with observations, unusual experiences and any insights I may gain, which will be published on the editorial page as I send them. When I have wireless availability, I will Tweet as @athensmyra. I haven’t been very active on Twitter, so I often don’t think of that first. I also have a Facebook page, Athensmyra in Turkey.

Yes, I’ll miss Athens, but, as the Prophet Muhammad said, “Don’t tell me how educated you are, tell me how much you have traveled.” I’ll keep you posted.

Elif Aslaner, a religious education teacher who gave birth on Wednesday at a private hospital in Bursa, was detained due to her alleged links to Turkey’s Gülen group on Friday. Aslaner’s husband said his wife had preeclampsia and suffered from convulsions when she gave birth to her first baby and remained in a coma for two days.