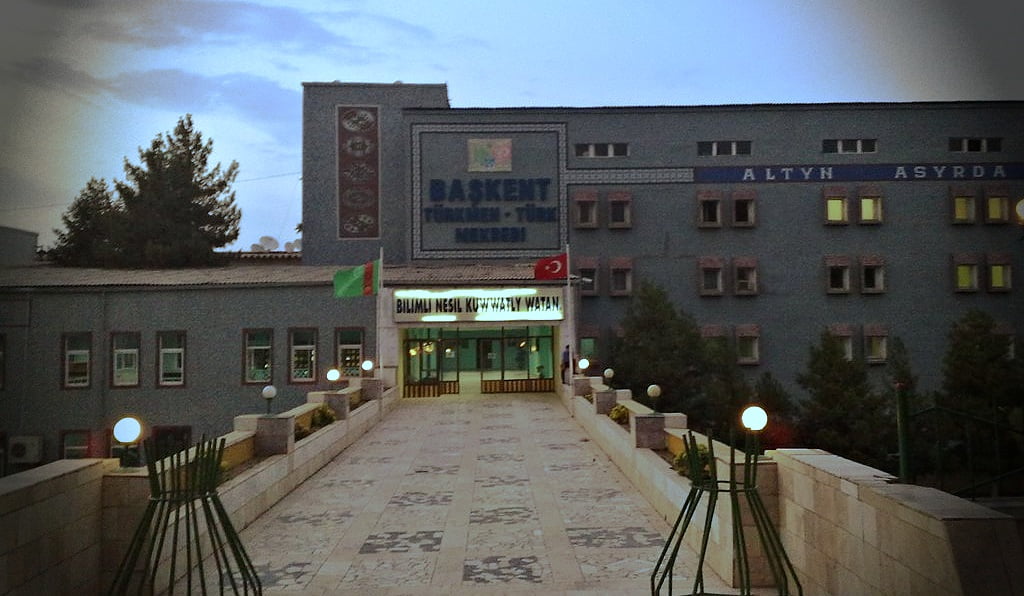 An old Turkmen proverb says that if two horses fight, it is the donkey in the middle that will die. This aptly describes the fate of Turkish-Turkmen schools in Turkmenistan, a Central Asian country which has been ruled by an autocratic regime since it gained independence from the Soviet Union in 1991. A few years back, the Turkish schools fell victim to the bitter enmity between Turkish President Recep Tayyip Erdogan and US-based Muslim cleric Fethullah Gülen, two former allies turned bitter enemies. The implications of the feud have reached far beyond Turkey’s borders and continue to this day, especially following the alleged July 2016 military coup, which Erdogan accuses Gülen of orchestrating.

In this highly isolated Central Asian state, “Turkish schools” guaranteed good education and a relationship with the outside world. But now, they’re the target of attention and repression from the authorities

The Gülen Movement, also known as the Hizmet (“Service”) Movement, was created in the 1970s by Turkish preacher Fethullah Gülen. The movement consists of volunteers in social services, with an emphasis on the importance of science and technology and the promotion of dialogue among religions and cultures, for a world living in peace and welfare. It promotes pluralism and considers difference in opinions in society as natural. It first started as a small community in Turkey, but rapidly expanded throughout the world. Numbers vary, but according to some estimates, today it is present in as many as 120 countries running approximately 3,000 schools across five continents.

Following the Soviet breakup in 1991, the Gülen Movement established themselves in reclusive Turkmenistan, too. “I have been to many countries and looked at the service’s schools, course centres and other organisations,” a member of the service in the country who requested anonymity tells me. “I tend to think that Turkmenistan is one of their most striking success stories.”

In a country with a population of five million, there were five Turkish-run elementary schools, 12 high schools, 10 course centres where English, Turkish, science and computer skills were taught, as well as a university. Given the low quality of the education system in independent Turkmenistan, where it is possible to bribe one’s way through higher education to become teachers, the opening of Gülen’s Turkish-Turkmen private schools was taken as a sign of hope for a brighter future opened to the outside world.

“Allah has granted me happiness for I worked there as a teacher,” the service member continues. “We did not anticipate a single worldly thing for us, and we still aren’t. I only regret the free time that I spent doing nothing. Now I think I should have done even more to educate and discipline the school children, in line with our spirit of our humanitarian aid.”

The first Turkish-Turkmen school was opened in 1993 in Ashgabat, the country’s capital, during an official visit of then Turkish president Turgut Özal, and was named after him. In contrast to the Turkmen schools, in the Gülen schools – or Turkish schools as they are known in Turkmenistan – mathematics, physics, chemistry and biology were taught in English; world history and geography in Turkish; and Turkmen history and law in Turkmen by Turkmen teachers.

The schools brought the idea of non-state, private schools to the country. They blossomed under the tenure of Deputy Minister of Education Muammer Türkyılmaz, a Turkish national and one of the key figures of the Gülen Movement who was appointed to the post by former Turkmen president Saparmyrat Niyazov. The high-quality education pupils received in the Turkish schools filled a huge gap in the country’s struggling education system, and their students won medals in various international inter-school contests, known as the International Science Olympiads.

Depending on its size, each school accepted between 50 and 100 pupils each year. It is no wonder that places in the Turkish schools were highly coveted, so the authorities were trying various ways to be admitted. Foreign diplomats and businessmen living in the country often chose to send their children to these schools.

Slowly, Turkmen teachers who had themselves studied in the Gülen schools started replacing the original Turkish teachers

Wikileaks papers reveal that in 2009 the US Embassy identified the students of the Turkish-Turkmen university as “the only qualified applicants in the country” for exchange programs between the US and Turkmenistan, as well as the Fethullah Gülen Movement as a potential partner in fostering the growth of civil society in the country in the long run.

Slowly, Turkmen teachers who had themselves studied in the Gülen schools – and even enrolled at foreign universities with the help of the network – started replacing the original Turkish teachers

Likewise, while at the outset most funding came from the Başkent Foundation, the movement’s financial organisation, with time Turkmen donors, including alumni, began to emerge, making the schools financially independent, with only minimal support coming from the state.

In 2010, however, signs of a bitter power struggle emerged between president Erdogan and Gülen, with the former starting a concerted campaign against the latter’s enterprises and educational institutions. Soon, the fight reached the countries that housed the Gülen schools. In Turkmenistan, Turkish managers and teachers at the schools were refused visas, so the Başkent Foundation replaced them with local teachers. But eventually, in 2011, the schools were put under state control with no official explanation.

Today, they operate as specialised boarding schools and teachers are appointed by the local branches of the Ministry of Education. The quality of teaching has dropped drastically. Locals complain that the teachers’ education levels are “even lower than the pupils’.” Basically, instead of teaching, teachers kill time in class. A father of one of the pupils attending a former Turkish school told me that, often, in the classroom, students beg teachers “to teach them something useful.”

Today, the aftershock of the closure is still being felt in the country, but the government doesn’t seem in a rush to fix the national education system. A Turkmen school teacher and movement member (who spoke to me on the condition of anonymity) says that the closure of the Turkmen-Turkish schools dealt a severe blow to Turkmenistan’s record on education: “I read about Gülen’s thoughts on education and knowledge and saw them put into practice. We have indeed the opportunity to educate our children at the highest international level by applying his methods. But for political reasons we cannot do that any longer.”

Ahmet, 27, agrees. He says that, when studying at a Gülen school, “for the first time we saw teachers caring for us. They were prepared to do more than to teach. They were making an extra effort for us, showing exemplary behaviour, such as rushing to help when a school boy got sick, finding medicine for him. Or in another case, a teacher interceded between a young man and his father, bringing them together.”

Perhaps such zeal raised others’ suspicions. “Nobody would do such things without a hidden goal,” wrote one user in a Turkmen chatroom, where the pros and cons of the Turkish schools were being discussed. But the former teacher disagrees: “If you look with a materialist worldview at the issues, then this question comes up. The movement is not materialistic but idealistic. They work for an ideal and expect reward in the afterlife.”

Turkish president Erdogan has accused Fethullah Gülen and his aides of orchestrating the failed coup in July 2016 in Turkey. He accused him of heading a parallel movement to undermine the state and leading an armed terrorist organisation. Gülen has strongly denied all accusations, retorting that the coup was staged by the government. Turkey has demanded Gülen be extradited from the US to be tried in a Turkish court.

A massive crackdown has followed in Turkey, with tens of thousands of people dismissed and arrested. The purge has reached other countries. Following his visit to Pakistan in November 2016, Erdogan welcomed the closure of “Turk-Pak International schools.” Other government, such as Kyrgyzstan’s, resisted pressures to close the schools and to deport Gülenists, rejecting the accusations as nonsensical.

In Turkmenistan, a country known for severe human rights violations, the measures have been extremely harsh. More than 100 people linked in one way or another to the schools or the movement (teachers, directors, entrepreneurs, businessmen and sympathisers) have reportedly been arrested. In 2017, human rights organisations reported that 18 of them have been tortured in detention and sentenced to up to 25 years in prison.

It is likely that the Turkmen government used the opportunity to rid the country of a parallel school system that taught pupils critical thinking, which may eventually be used against it. Be as it may, the closure has dealt a major blow to the country’s education system, setting it back to the dark times of former president Niyazov, during whose tenure pupils were subjected to the teachings of the Rukhnama, his spiritual guidance book. The latter was expunged from curricula when Niyazov died in December 2006.

Today, whoever can afford to pay a bribe can easily pass state university exams and eventually land a much coveted state job. But even though Gülen’s image has been tainted by the harsh accusations coming from Ankara, the Turkish schools left something of a legacy in Turkmenistan. “These schools have educated people who speak four languages, who have received a high level of education at the international level, who are decent and well-mannered, loyal to the homeland,” the former teacher explains. “I mean loyal in the real sense of the word, because there are many graduates who came back home to earn 1,500-2,000 Manat [approximately 100 GBP on the Turkmen black market], when they could expect a decent life abroad.”

Naz Nazar is the former director of RFE/RL’s Turkmen service. Her work has appeared in The Washington Times, among others. In 2011, she was awarded the Best Bloggers Worldwide 2011 prize from the Foreign Press Center of the US State Department for her work on Turkmenistan and the region.