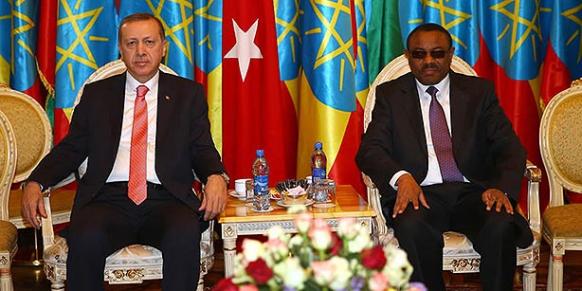 President Recep Tayyip Erdoğan called on the African countries to close down Turkish schools during a visit to Ethiopia last week. (Photo: Cihan)

“In the countries we visit we have been talking about the status of these schools and saying they should be closed down,” Erdoğan was quoted as saying by the state-run Anadolu news agency during a visit to Ethiopia on Jan 22.

Veteran film critic Atilla Dorsay slammed the move to close the schools abroad, which had earned the respect of politicians who have served for the last 25 years.

“Can there be such a thing? Can a politician attempt to demolish a huge cultural and economic investment that originates from his own country’s resources and spreads the word “Turkish” all over the world?” asked Dorsay.

Mehmet Altan, an academic and prominent journalist, told Today’s Zaman on Sunday that foreigners will not be able to make sense of Erdoğan when he says, “Close their schools; we [the government] will open new ones.

“The attempt to destroy an initiative that bring the Turkish language and educational services to the world is not logical or sound” said Altan.

Journalist Mustafa Akyol expressed his objection to the closure of the schools due to the fact that such a move targets a civil initiative.

Likening the badmouthing of the schools to the restrictive practices of the Turkish state in the 1920s, Akyol said anyone who supports democracy and civil society should object to the closure of the schools.

Singer Atilla Taş said the president had made an affront to the image of Turkey by paying high-level visits to countries in order to defame a group and target its initiatives. Taş said even children would laugh at what is being done.

“There are places without schools in Turkey in 2015. If new schools are to be opened, those places should be prioritized,” said Taş.

The editor-in-chief of the Rota Haber news portal told Today’s Zaman on Sunday that the schools along with the founder of the republic Mustafa Kemal Atatürk are the only Turkish brands that are renowned worldwide.

He stressed that the government does not have the authority to close down the schools since they were established by the private initiatives.

Journalist Yavuz Baydar said Turkey is unfortunate in terms of the attitude of its statesmen, who have ordered the destruction of useful things to build new ones according to their wishes.

“Those who assume power in this country refuse to acknowledge the good things that were done before their time and demolish them to do things according to their desires. That is why those who came to power in military coups acted irrationally,” said Baydar.

Ufuk Uras, a founder of the Greens and the Left Party of the Future (YSGP), called the campaign against the schools “vandalism” due to the fact that those schools were founded with no small amount of effort.

“If you [the government] want to open schools, there is no need to close down the existing ones. … I don’t find this move to be a proper approach,” said Uras.

Nationalist Movement Party (MHP) leader Devlet Bahçeli has said that Erdoğan humiliated Turkey by going on an official trip to Africa in order to smear the Turkish schools and ask for their closure.

“Those who visit Africa to close down schools and open new ones must first of all take into account their school reports, which show low grades in justice and morality,” said Bahçeli via Twitter on Sunday.

Politician Gürcan Dağdaş lashed out at Erdoğan’s smear campaign of the schools from his Twitter account on Sunday.

“While your envoys were busy holding receptions, the closure of schools in foreign countries, which serve to raise awareness about Turkey, is treason” said Dağdaş.

Independent Ankara deputy Haluk Özdalga defined Erdoğan’s movement as “unfortunate.” He underlined the fact that the schools contribute to the recognition of Turkey in other states.

“We have to see the functions [of these schools] from different perspectives. First of all, they serve to educate young people who will serve their own country and the world. During this process, a young person [in a foreign country] who knows about Turkey is formed. I especially underline the fact that they know about Turkey, because having knowledge about the other is the first step in the friendship and cooperation between countries and nations,” said Özdalga.

CHP Deputy Chairman Mehmet Bekaroğlu argued that the government does not have the authority to request the closure of the schools, as these schools were founded with the initiatives and resources of entrepreneurs.

Bekarloğlu also pointed out that Erdoğan’s accusations against the Gülen movement — which is also known as the Hizmet movement and is inspired by Turkish Islamic scholar Fethullah Gülen — have no legal basis and there aren’t any ongoing investigations into the movement.

People’s Democratic Party (HDP) Diyarbakır deputy Altan Tan stressed that the state should first focus on issues in its own schools before vowing to open schools abroad.

“I wonder how the state, which is incapable of solving even the issues in Ankara, will be able to open schools in Ethiopia. The number of students in classes is, on average, 50. If African politicians are whys, they should not listen to Erdoğan’s ideas. … I suggest Ethiopia send educators to our country if they can because we are in need of educators too” said Tan.