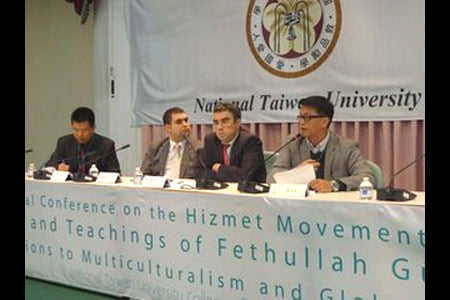 Participants of the Formosa Institute’s international conference on the Hizmet movement are shown at National Taiwan University in Taipei. Photo credit: The China Post)

Who exactly is being targeted? As former CIA official Graham E. Fuller, wrote in The Huffington Post, Gulen operates a civil movement called “Hizmet,” which translates to “Service,” and probably has more than one million followers or sympathizers who are not under centralized control.

The group’s exact scope and ambit is difficult to define; people and organizations who say they are “Gulen-inspired” operate around world, often focusing on cross-cultural, business and education ties with Turkey.

As of late July, the number of people thought to be affected by the crackdown in Turkey totaled almost 60,000 – including 21,000 teachers whose licenses were revoked, 8,000 police removed from their posts, more than 250 staff from the prime minister’s office, as well as judges and soldiers, according to the BBC.

Around the world, Turkish diplomats have relayed Erdogan’s line – that plotters in the military linked to FETO tried to “overthrow the democratically-elected government and the constitutional order in Turkey.”

In Taipei, the “Gulen-inspired” Formosa Institute is feeling Erdogan’s reach.

Burhan Cikili is an academic and vice-chair of the institute. The organization, which has a plush office on the 21st floor of a central Taipei office building, is something of a local think-tank linking Taiwan and Turkey. It holds conferences, seminars and lectures, and collaborates with local universities and institutions. It says it is mainly funded by local Taiwanese and Turkish businesspeople.

Cikili told The News Lens International he is confident Taiwanese understand the line being pushed by Turkish officials – including the representatives in Taiwan who are understood to have told local media about the Formosa Institute’s Gulen ties – is “slander.”

In response to questions about the institute being now linked to an official – in Turkey at least – terrorist organization, Cikili points to the numerous lectures and presentations the organization has held on the issue of Islamic terrorism in recent years. And he says most of the people prominently associated with the group are Taiwanese, and none have asked to have their names formally removed from any public material linking them to the institute since the July 15 coup.

However, financially, and in political capital terms, the organization is taking a hit.

Previously the institute and the Turkish office in Taipei had a solid working relationship. Cikili says financial and practical support for the institute has declined amid pressure from Turkish officials in Taiwan, a trend that started after the alliance between Erdogan and Gulen broke down in 2013. This likely reflects the fact that some supporters are toeing the official Turkish line for business reasons.

Cikili says the latest coup attempt in Turkey will only worsen the institute’s financial situation.

“We, of course, will feel the impact,” he says.

While he is defensive of Gulen – the person and the movement – and keen to push the narrative that Erdogan may have had a hand in the coup himself, Cikili for the most part appears despondent about Turkey’s bleak outlook. He notes that it was only recently Turkey’s economy was developing rapidly – in 2011 it was the second fastest after China among major emerging market economies.

“After this coup attempt I am not sure if we will have another election or not,” he says.

He is personally not afraid to return to Turkey, but is worried about his friends and family at home. There are hundreds of Gulenist schools across Turkey, and Gulenist media is widely circulated, which puts huge numbers of Turkish people at risk of being labelled as part of a terrorist group.

For Taiwan in particular, Cikili says it is “very sad” to see the tourism ties, which had been strong between the two countries, come to a halt as most countries warn citizens not to travel to Turkey.