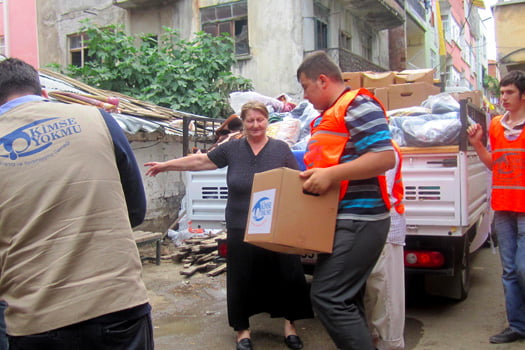 The Kimse Yok Mu charity will hand out 288,300 food packages to people in need as well as host iftars (dinners to break the daily fast) serving 1,168,000 people throughout Turkey and 103 other countries during the holy month of Ramadan.

The month of Ramadan, commonly known in Turkey as the sultan of all the months, is considered the most venerated, blessed and spiritually beneficial month of the Islamic calendar.

For this reason, Kimse Yok Mu, as well as other charity organizations, will actively operate in all of Turkey’s provinces and provide help to those in need in 103 other countries around the world by offering iftar meals and distributing food packages during Ramadan, according to the Cihan news agency.

Kimse Yok Mu has been distributing aid packages during Ramadan since 2007. Last year, the organization distributed 105,402 food packages in the country, offered iftar meals to 606,000 people in 16 provinces and provided a further 75,000 food packages to 71 countries.

This year, the foundation has raised its target for this Ramadan and will distribute 178,300 food packages and have iftar tents in 22 provinces, feeding an estimated 636,000 people.

The association intends to distribute 110,000 food packages to families in need in 103 countries and offer iftar meals to 500,000 people around the world.

Kimse Yok Mu is calling on all potential donors to help with this humanitarian campaign.

The association has reached out to people from 103 countries to distribute donations made by Turks during Ramadan, Eid al-Fitr and Eid al-Adha. Kimse Yok Mu accelerated its branching and networking efforts in 2006. Opening offices in the larger cities of Anatolia, the association now has branches in 28 cities. This number is expected to increase in the near future.