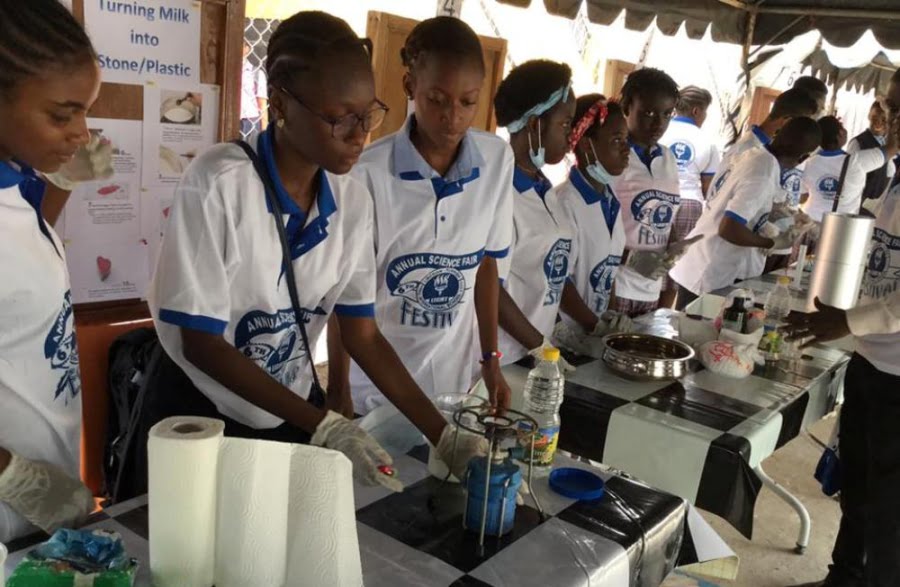 The Turkish Light International School System campus came alive when students between ages 10 and 18 demonstrated their talents in a science exhibition.

With their respective ambition as Scientists, Chemists, and Biologists, they demonstrated their skills, making volcanoes, changing liquid to solid, among others. The school’s science and technology department has attracted many students to enroll in the institution.

Speaking over the weekend at the 7th Annual Science Fair, a Biology instructor of the school, Mr. Melville Edmond, Sr. recalled the first science fair was held in 2009- 2010 academic year when the school was at the junior high level.

He said from that period up to now the school has produced young students, who are burning with passion to achieving their dreams in various science disciplines.

The head of the science department said the decision to focus on science is to provide opportunity for students who are so desirous of becoming Scientist, Chemist, Biologist, among others.

According to Mr. Menville, the primary objective of the program is to introduce young people, who are interested in following their dreams by providing them a venue where they can exercise their scientific imagination, adding that it is also meant to be a human adventure, encouraging students to demonstrate skills that they have.

He said the program also provides inspirational motivation for students of the next generation of the scientific professional that will come, saying as we all sit and witness this event let it not be seeing as a light international program, but rather it must be seeing as a event that can interest parent and guardian to support their children skills.

Meanwhile Health Minister Dr. Bernice Dahn says the fair program very impressive, saying the science in the education system was limited to see the science fair and what these children are doing very well.

When quiz about the reason why there had been lack of interest from students in the science field, Minister Dahn quickly responded by saying the reason why there are lack of interest in the science field has to do with vacancy that was created by the war that cause the death of most science teachers, but am sure the performance they carry out here we can say they can now compete with other students in the region.