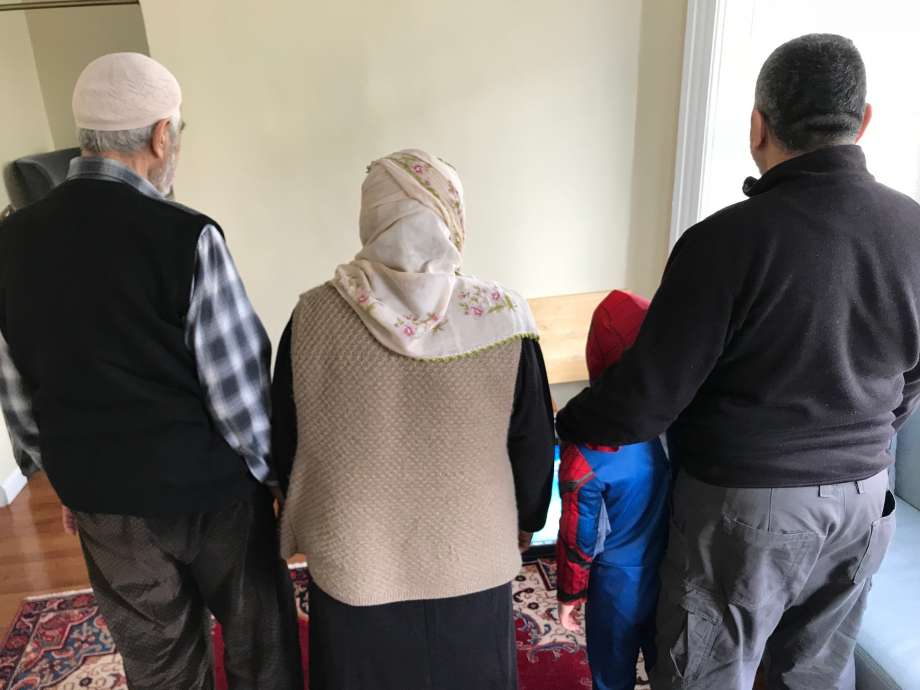 A Turkish family who fled a purge by Turkey's authoritarian regime are fearful political refugees living in an apartment off Delaware Avenue in Bethlehem.

Three generations of a Turkish family were stripped of their livelihoods, life savings, friends and culture in a sweeping purge by the authoritarian regime of Turkey’s President Recep Tayyip Erdogan.

They languish as political refugees in a cramped apartment along a busy commercial stretch of Delaware Avenue.

“We feel like prisoners. We are alone and afraid to go out. We don’t know who we can trust,” said Yavuz, 48, the father, a former elementary school teacher and government worker. His anguish and stress contributed to a recent stent procedure for a heart condition.

In the next breath, he apologized for sounding ungrateful given the assistance the family has received. They’ve been given food, furniture, clothing and money from the Turkish Cultural Center of Albany and the Refugee Roundtable, a grassroots volunteer group affiliated with the U.S. Committee for Refugees and Immigrants’ field office in Albany.

Yavuz agreed to speak with me on the condition that I used only nicknames for him and his family members because they fear reprisals by Erdogan’s regime against relatives still living in Turkey. His English is rudimentary. He spoke through a translator and agreed to pose for a photograph, but only if his family’s backs were turned to the camera to shield their identities.

The family of five – grandparents, parents and a 7-year-old son – fled 5,000 miles from home to avoid the imprisonment faced by thousands of their countrymen following a failed military coup against Erdogan on July 15, 2016.

“We didn’t do anything wrong,” Yavuz said. “They targeted us because we follow Gulen. Our names were on a government list. We were lucky to avoid jail.”

He was summarily fired from his teaching job, his bank account was frozen and much of his life savings was seized by the government. He fled with his family before he was imprisoned like thousands of fellow Gulenists, who are followers of the Muslim cleric Fethullah Gulen.

The Turkish government’s crackdown included the firing or suspension of more than 150,000 public officials and civil servants, including nearly 30,000 teachers and academics, 2,200 judges and prosecutors, and hundreds of journalists, according to Human Rights Watch. In addition, more than 185 media outlets were shut down and 2,000 schools and universities were closed because of their affiliation with Gulen. Erdogan declared a state of emergency, which suspended freedom of expression and constitutional rights, as the aggressive purge targeted members of Turkey’s hizmet movement, which means service. A few million Turks follow Gulen’s moderate form of Islam, which emphasizes higher education and secularism. Gulen is a former political ally of the hardliner Erdogan, but the two had a bitter falling out in 2013 over a government corruption investigation. Gulen became the president’s nemesis and the 76-year-old charismatic cleric, who is in failing health and who lives in self-imposed exile in Saylorsburg, Pa. Erdogan accused Gulen of organizing the coup, in which 290 people were killed and more than 1,400 were injured. Gulen has repeatedly denied involvement and the U.S. government has declined to extradite Gulen to Turkey.

Yavuz, his wife, Azra, and their son, Hilmi, settled in Albany nearly a year ago. They await a decision on a political asylum application. They share an apartment with his father, Abdurrahman, and mother, Nermin, who are in their 70s and in poor health. His father is a retired owner of a successful office supply and bookstore in Istanbul. His parents worry about their other children still living in Istanbul. They have been harassed by the government and neighbors because of their affiliation with Gulen.

Even in the Capital Region, the roughly 250 Turkish families who live here are bitterly divided between pro-Gulen and pro-Erdogan supporters.

“None of us are doing well. We’re stuck. We can’t go back to Turkey and we have enemies here,” said Cuneyt, 42, a nickname. He served as translator. He was fired from his university faculty position because he is a Gulen follower. His wife is a professor conducting scientific research at a university in the Northeast on an academic visa.

“I feel oppressed, depressed and trapped. I don’t know what to do,” Cuneyt said. “We feel we have no right to complain when our friends are being held in prison and tortured in some cases.”

Cunyet sees the purge of Turkey’s Erdogan regime and the suspension of press freedoms and constitutional rights as a cautionary tale against a rising tide of authoritarianism around the world. He said Americans should remain vigilant about U.S. President Donald Trump’s attacks on the First Amendment and his penchant for dismissing critical coverage as “fake news.”

A bright spot for the refugee family is their young son, Hilmi. His English is excellent. He happily attends first grade at a Bethlehem public school. He plays soccer at recess. He likes his teachers. He rides the bus with his best friend, a boy from Turkey. They speak to each other in Turkish.

The boy said he had something to show me. He ran to his bedroom and came out dressed in his Halloween costume: Spider-Man. He jumped up on a couch and flexed the faux bulging muscles of the costume.

The boy giggled. His father smiled for the first time during our two-hour interview.

Paul Grondahl is the director of the New York State Writers Institute and a former Times Union reporter. He can be reached at[email protected]

It isn’t fair to blame Islam for the atrocities of violent radicals. But when terrorists claim the Muslim mantle, then they bear this identity, if only nominally. Thus members of the faith must do whatever possible to prevent this cancer from metastasizing in our communities. If we don’t, we’ll be partly responsible for the smeared image of our faith.

“The day I was detained, five police officers took me to a mountain and beat the hell out of me. I have been kicked in the head and genital area tens of times. I managed to identify two of the torturers. One of them was called Nejdet and the other one was Battal. Yet, maybe they use nicknames…. I do not have strength to tell you about all the humiliating sexual torture I faced that night,” a victim said.