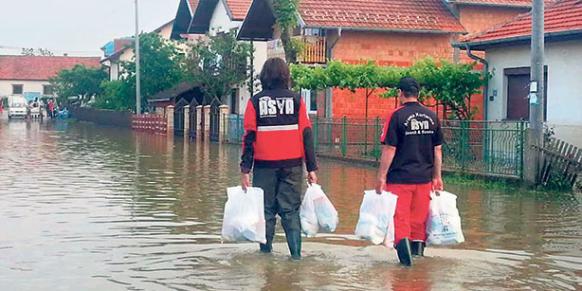 Turkey has announced that it will continue to offer assistance to help its longtime Balkan ally Bosnia recover from a disastrous flood, in recognition of the fact that, as Bosnian President Bakir Izetbegovic said when speaking to a CNN reporter in May, “This is the worst thing we’ve faced since the war.”

Bosnia and Herzegovina recently experienced the worst flooding since record-keeping began over 120 years ago. Three months’ worth of rain fell between May 14 and May 17, leaving a quarter of the nation’s population, primarily in northeastern and central Bosnia, affected by the inundation and accompanying landslides. Cities such as Maglaj, Doboj and Bijeljina, among others, were all but submerged under water, often leaving people stranded and waiting for help on their rooftops.

“At the moment, everyone is helping each other. … We are not thinking about the things that divide us,” Izetbegovic said. Some 20 years ago, Bosnia was engulfed in a war following the breakup of Yugoslavia that ended with strained political and ethnic relations and left millions homeless and impoverished. The country is still struggling to recover.

Foreign Policy magazine reported that at a news conference in May, Bosnian Foreign Minister Zlatko Lagumadzija said: “During the war, many people lost everything. Today, again they have nothing.”

Melissa Rustemov, a 21-year-old Bosnian woman from central Bosnia, gets off the phone with her grandmother who lives in Matuzici, a small town outside of the city of Doboj; devastated, she says, “The water has covered both of our houses; one all the way to the roof and the other up to the second floor. Everything is ruined.”

With ties that date back to Ottoman times, Turkey has always been willing to help Bosnia, and contemporary regional trilateral mechanisms, such as the agreement between Bosnia, Turkey and Serbia, have further strengthened the longstanding relationship Turkey has with Bosnia.

According to Turkey’s Ministry of Foreign Affairs, Turkey is one of Bosnia and Herzegovina’s largest foreign direct investors. Turkey has invested some $81 million in Bosnia in various infrastructure and housing projects as well as manufacturing and hydroelectric power plants.

Turkey’s commitment to Bosnia made it natural for Turkey to help the people of Bosnia during this natural disaster. Many Turkish government and private organizations are taking part in ongoing efforts to aid the flood victims. Izetbegovic told CNN, “Everyone is doing their best…Turks are doing their best.”

Turkish Minister of Foreign Affairs Ahmet Davutoğlu tweeted on May 18, “Our related institutions at home and peacekeeping troops stationed in the region are ready to offer every kind of help.” According to Turkish media reports, Turkish Ambassador to Bosnia and Herzegovina Ahmet Yıldız said that aid is being transported to Bosnia by Turkish troop vehicles from the European Union Force (EUFOR), including 125,000 sandbags, generators, drainage pumps, blankets, cleaning materials and relief teams,.

Organizations such as the Turkish Cooperation and Development Agency (TİKA) have sent humanitarian aid to flood victims all over Bosnia and Herzegovina, including two convoys that delivered emergency supply kits, blankets, and fuel, Turkish news sources say, and TİKA has said it will send more as necessary.

Turkish media reports also indicate that the Prime Ministry’s Disaster and Emergency Management Directorate (AFAD) participated in aid coordination with other humanitarian relief organizations throughout Turkey in order to help those affected by the floods.

Among the local charitable organizations that have responded, Beşir Derneği (Beşir Association), a local Turkish humanitarian aid association, provided immediate relief for the flood victims. They tweeted pictures of small groups of their volunteers who were able to cover a lot of ground in Bosnia during the first few days of the flooding, hastening the rescue process. A member of the organization Genç Boşnaklar Derneği İstanbul (Bosnian Youth Association of Istanbul) spoke to Sunday’s Zaman and said, “In seven days, TL 11,500 was collected,” and the Ankara organization Udruzenje Studenata Turska (Students’ Association of Turkey) also collected more than TL 8,000, which they brought to Bosnia to help flood victims.

Yıldırım reported to Sunday’s Zaman that Kimse Yok Mu’s involvement is “[dependent upon] the budget that [we] have and depending on donations they receive.”

Ertuğrul Yorguner works for ASYA, the Kimse Yok Mu search and rescue team, and is responsible for the relief team organized in Bosnia during the first few days of the floods. His team of three Turkish volunteers met with 12 Bosnian volunteers to prepare packages with food, supplies to help with cleanup and boats. They distributed over 1,500 emergency packages in the cities of Zenica and Doboj in central Bosnia, as well as Maglaj, Orašje, and Bijeljina in the northeast. The most urgent need for help was in Bijeljina and Orašje, where the floodwaters had still not yet receded. In Maglaj and Doboj they cleaned out homes destroyed by the flooding and provided beds, blankets, food and cleaning supplies. According to Yorguner, Kimse Yok Mu allocated $110,000 for Bosnia in monetary aid as well as supplies.

“They [Bosnian people] were very grateful. … They feel as though they are not alone,” Yıldırım said.

Bosnia is still ill equipped to deal with the aftermath of the flood; its economy has not fully recovered from the war and the unemployment rate is at around 44 percent. Izetbegovic publicly admitted that Bosnia would probably “need a few hundred million [euros]” to make it through this summer.

In a press release on May 18, the Turkish Ministry of Foreign Affairs said that they plan to continue to provide assistance based on requests from the region.

The relief that Turkey has provided to the flood victims has tremendously helped Bosnia move toward recovery. This assistance shows that close relations can be both necessary and beneficial in times of need.