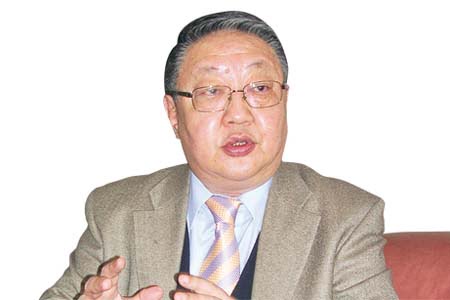 The ties between Turkey and Mongolia, which have remained relatively modest so far, are expected to get a substantial boost with Prime Minister Recep Tayyip Erdoğan’s visit this week.

“Erdoğan’s visit will give a great impetus to bilateral relations,” Badamdorj Batkhishig, Mongolian ambassador to Ankara, has said.

There are currently 56 Turkish companies in Mongolia, mostly in the restaurant business and leather industry. Last month, around 10 businesspeople from the Turkish Confederation of Businessmen and Industrialists (TUSKON) visited Mongolia, and 20 more Turkish businesspeople plan to pay a visit this month.

But it’s not only economic relations which connect Mongolia and Turkey. “Historical ties connect us more than money, because Turkish and Mongolian people are connected to each other by history,” Batkhishig emphasized. The Turkish and Mongolian nations share common historical roots, and Mongolia sees Turkey as its “third neighbor,” though the country is physically surrounded by only China and Russia.

There are currently around 900 Mongolian students in Turkish universities, with half of them getting scholarship from the Turkish government. A Turkology department was established at the Mongolian National University by a protocol signed between the university and TİKA in 2001. “Mongolians learn Turkish very fast,” the ambassador noted, because the sentence structure is very similar. The two languages have more than 1,000 common words such as “elçi” which means envoy. Turkish schools in Mongolia also play a major role in connecting the two peoples. There are at present five Turkish schools in Mongolia, with two of them being in Ulan Bator, and the remaining three in other cities. Turkish schools, which teach in three languages, namely Mongolian, English, and Turkish, are in high demand in the country.

Excerpted from the article published on Today’s Zaman, 09 April 2013, Tuesday